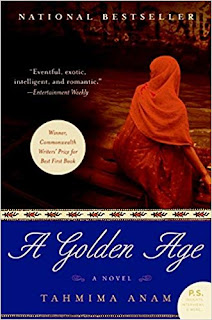 A Golden Age, by Tahmima Anam

(Just a note -- I've been traveling a lot.  I went to Portland for four days, took a day trip to Sacramento, and am about to head out for the wilds of Utah for eight days.  So while I'm reading, I'm certainly having a hard time finding time for blogging.  I'll be back, with plenty to talk about, fairly soon.  And I will have pictures to share too!)

Meanwhile, Rehana is preparing for a party and remembering her past.  Widowed all too young, she had no means to support her two children, and her husband's relatives took them away.  The lengths Rehana went to in order to get her children back have always been her most closely-held secret, and now the kids are grown and attending university.  The party is for the anniversary of their return, but it's 1971 in East Pakistan and the kids are really more interested in politics and the movement to break away from West Pakistan.  The Pakistani rulers are not about to let these upstart Bengalis have their way, and through nine months of war, Rehana finds herself helping with the rebellion and once again, doing everything to keep her children safe.

The story is actually based on Anam's own grandmother's experiences during the 1971 war, which she explains in an afterword.  Plus, it's a really good novel.  I've been meaning to get around to it for over a year, and now I'm sorry I waited so long.
20 books of summer Asian literature read around the world