Angels in the Mist -- Summer Book 8 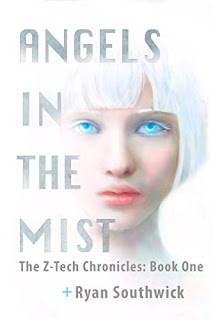 Angels in the Mist (Z-Tech Chronicles), by Ryan Southwick

Once upon a time in high school, I had a buddy named Ryan.  He's a fun guy and helped me get a good job driving pizza at Arnoldi's (though in hindsight I'm surprised that my parents let me drive pizza!).  We lost touch for a while, like you do, but with the magic of Facebook, we can  keep up again.  Ryan has always had ambitions to write, and now he's finished his first novel, which is going to be a trilogy, so obviously I wanted to read it!

It's true that this is not my usual kind of story -- you will not find a lot of tech/fantasy thrillers reviewed on this blog -- but I had a lot of fun with it.  It's a real page-turner with lots of action and suspense.  I was, at times, a little frustrated because I wanted ANSWERS to my QUESTIONS, and I wasn't at all sure that I would get them before the next volume (or, horrors, the third!).  Happily, the satisfaction/suspense ratio is nicely balanced and I came away with some good answers and some nice anticipation for the next installment.

The story: Anne gets along as a waitress in San Francisco; her life was derailed 18 years ago in a brutal attack, but she now brightens her customers' days and manages her PTSD symptoms as much as she can.  She's even thinking about entering the dating scene, but her first date goes awry and instead she's dropped into a new world -- one featuring vampires, cyborgs, martial arts, and a whole lot more.  She finds new, wonderful friends (some of which are human), romance, and a whole lot of danger.  With an angry vampire determined to rip her to shreds, Anne needs to use her own strength and learn to trust others too.  Learning to shoot a plasma gun really well would also be a good idea.

So, I enjoyed Angels in the Mist.  It's long, with a lot of plot and all sorts of things going on, and it's got more romance than I usually go for (which is almost zero, so most people like more than I do), and it's hard to put down.  The pace keeps up and the whole thing is a wild ride.


I received a free copy of this book in exchange for an honest review.
20 books of summer SF/fantasy