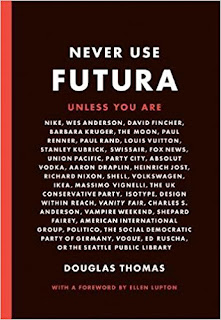 Never Use Futura, by Douglas Thomas

This title really caught my eye; a book entirely about the Futura font!  Thomas starts off by commenting that in design school, they always tell you never to use Futura -- and yet, all the giants do, so what's up with that?  Let's talk about this massively influential font.

Thomas has a lot of fun talking about the development of Futura -- at first it was really quite avant-garde and had some features that many found kind of extreme (although attractive).  Soon it got a bit toned down for more general use, and it hit the big time, spawning a zillion imitators.  For one thing, Futura was a German font and you know nobody wanted to support that during World War II, so Americans came up with a home-grown version that was virtually identical.

Futura is so familiar that even a total ignoramus like me can recognize it.  It has a lot of flavors, though, so I did not at first know that the blocky capitals on the cover are in the same family as the type that I think of as mid-century schoolbook and very 1950s. 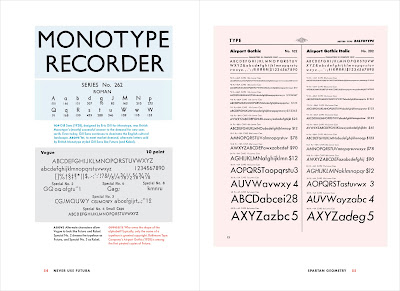 Of course, a book about design has to be mostly visual.  The 200 pages are probably less than half text, and are covered in wonderful diagrams and images that take the reader on a tour of most of the 20th century.  SO many famous things feature Futura fonts that it becomes quite the party.


So why should you never use Futura?  It's not like Comic Sans where designers kind of disdain it.  (Comic Sans, in an illustration of how maybe we shouldn't always listen to designers, turns out to be an excellent font for people with dyslexia, unlike Futura I am betting.)  Well, Futura is not easy to get right.  I gather that it's an easy default, but hard to do well, so maybe make sure you know what you're doing.  Use it thoughtfully and with purpose, with a sense of the history and connotations you're bringing to the piece.

Loved this book.  If you like looking at pictures and designs, you should find a copy!  And check out the Never Use Futura website too!

I am a total typeface nerd so I would love this. Need to get it in hardcopy as it obviously will not make the grade on my Kobo.

Yup, a hard copy is a necessity to enjoy it properly!

Oh this is super cool but -- will you judge me terribly if I admit to you that I have never heard of Futura the font? The book looks amazing, though, particularly all the awesome illustrations.

You don't have to have heard of it to recognize it!