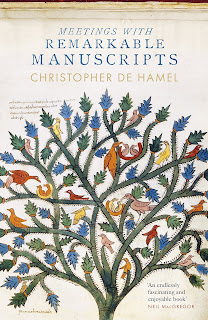 I had such a wonderful time with this book!  I actually started it in late 2017 and decided it would have to be my favorite book of the year, but then I was reading it so slowly (to make it last, and to absorb it properly) that I didn't finish until a couple of weeks ago, by which time I was so busy and frazzled that blogging sort of fell off the map for a while.  But now I can tell you about it!  Hooboy, this was such a fabulous book.

Christopher de Hamel is one of the bigger names in the world of medieval books (or so I gather), and he's written several things for a lay audience.  In this very long book, he travels around to twelve really neat manuscripts and does an in-depth...interview...with each one, describing the history of the book, how it got where it is now, what's in it, lots of information about the writing and art, and plenty of yummy details.  Every so often he offers a possible solution to a mystery or maybe just speculates.

There are plenty of beautiful photos of each manuscript, and that's where this book really shines.  It's just so much easier now to print detailed color photos, and de Hamel takes full advantage.  He's really trying to give the reader some impression of what it's really like to sit and study the actual manuscript, and in fact he often exhorts us to go out, find whatever old books are locally available, and figure out some reason to request a real viewing.  That's how he got his start (as a kid in New Zealand*) and he's very encouraging about readers getting involved.

Some of the featured books are famous enough that ordinary people like me have heard of them: the Book of Kells, the Hours of Jeanne de Navarre...but most of them are not quite that famous.  De Hamel chooses a volume of Chaucer, but not the most well-known one.  It's great that most of the books aren't ones laypeople are likely to have heard of, because there are loads of fascinating manuscripts around and we don't need to read about the same 8 books all the time.

The earliest manuscript is the Gospels of St. Augustine, from the late 6th century, with a few Roman-style illustrations and lovely uncial script.  The latest, the Spinola Hours, is from 1515 or so, a good 900 years later and a stunning example of book art.  In between we see not only prayer and scripture books, but astronomy, strategy, songs, and poetry.


I learned a lot from this book, but here are my favorite things that I learned:

The Codex Amiatinus, a Bible, contains a correction that may be in the Venerable Bede's own hand.  Also, in one of those weird literary coincidences that we all get every so often, I happened to be reading some bits and pieces about early Anglo-Saxon church history at the same time, so first I read de Hamel telling the story of how the Codex Amiatinus got around, and then I read the actual account.

Diana Wynne Jones left a secret joke in A Tale of Time City that I only got when I read a description of where the old texts are kept in the Bodleian Library.

Salisbury Cathedral's library of medieval books is still intact and you can apply to visit.  I suppose that's true of a lot of cathedral libraries, and if I ever get to go to the UK again, I am absolutely going to start thinking up excuses to apply to visit them.

Goering, that rat, stole the Hours of Jeanne de Navarre and then probably stole one of the best pictures out of it.  It was rediscovered in a train car stuffed with treasures, by getting stepped on.

Here is what to do if you are ever in a sea battle, says Hannibal:


Put venomous adders into bottles and toss them over the railings of the enemy's ship where they smash onto the deck, and the snakes can rush out and bite your opponents....while the snakes are hissing and attacking, throw curved metal blades, which cut through the enemy's rigging, and firebombs too which then set the sails alight....


So obviously this is a book that you've got to read if you're into old books.  It's just so fun, and the pictures are so fabulous.  Of course, most of these are digitized and available on the internet now too, but how will you know to go look for them unless you read about them?   I cannot think of anything more fun than to travel around the world to these libraries (from St. Petersburg to Los Angeles!) and visit these amazing books.  I suppose I'd better start with LA, since (to my shame) I have never been to the Getty...

*Apparently de Hamel is from Dunedin, which is also where my favorite NZ band is from.  Dunedin  was, in the 80s, a center for Kiwi indie music.