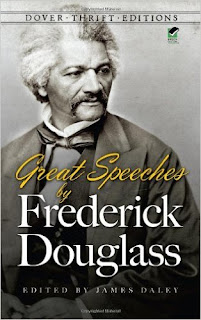 This is one of the younger books on my TBR pile; I traded my friend James my copy of The Souls of Black Folk for this and Up From Slavery.  I've read Douglass' Life and Narrative a couple of times, and sometime soon I'd like to read his other writings as well.

This is a small selection of speeches; Frederick Douglass must have given many, many more during his long public career.  They span over fifty years, from 1841 to 1894, which in itself is pretty awe-inspiring.

Early speeches are hard-hitting pieces about the evils of slavery and then one just after the Civil War about what to do next.  Douglass must have been amazing to listen to; these talks are so eloquent and heart-piercing to read, and they were meant to be spoken.  Later talks are narrower in subject; there's an oration in memory of Lincoln, a very long piece on John Brown (I was surprised to learn that Douglass and Brown were acquainted with each other), and one on 'self-made men.'

Douglass served as the ambassador to Haiti in the late 19th century, and a long lecture on that country is included here.  He extols the beautiful, lush countryside, describes exports and imports, and says that Haiti can be a really prosperous place if they can just stop having coup attempts all the time.  It's sad to read about so much hope and possibility for a place that I know to be very different 100 years later.