By Jean - June 21, 2016
It was around this time that we realized we were stuffing too much into our days, but that didn't really stop us.  Two major things a day were still not enough to do all we wanted.  I'm a bit short on photos for this post, because you can't take pictures inside St. Paul's, and the light is kind of dim in the British Museum, so I don't have much.  I've supplemented a bit with downloaded images.

On this day we started at St. Paul's Cathedral, the spacious and mathematically-pleasing baroque church that Christopher Wren built after the Great Fire of 1666.  What a different atmosphere it made!  For one thing, the main part of the cathedral has relatively few memorials compared to a place like Westminster, though Wellington's memorial is gigantic enough to make up for that.  We wandered around looking, and for once listening to the audio guides (every tourist destination in the UK now seems to have free audio guides, not maps.  The maps cost money.  We mostly disliked the audio guides and I think this was the second and last time we used them).  Pretty soon, we realized that the place was filling up fast and so we should go up to the Whispering Gallery sooner rather than later. 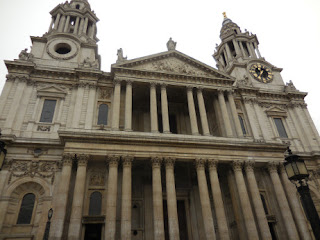 The Whispering Gallery runs along the inside of the dome, and is easy to get to.  Instead of a narrow stone spiral stair, there's a massive wooden spiral stair with very shallow steps.  You come out just under statues of the Church Fathers, and there's a nice bench.  My younger daughter wasn't sure she wanted to go any higher, and since I have been to the tippy-top of St. Paul's once (20 years ago), I hadn't planned to do it again, but we all decided to go up to the next stage anyway.  You climb up a lot of not-too-narrow stone steps, mostly not in a spiral, and come out on the outside of the dome.  We all enjoyed the view here, and had fun spotting the Globe theatre on the other side of the Thames. 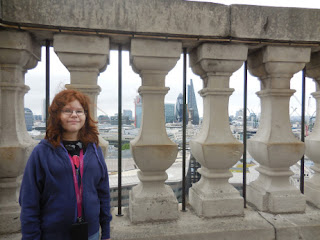 After this we admired the gorgeous mosaics in the dome and quire parts of the church.  These are modern, from about 1900, and very pre-Raphaelite looking.  They were quite the controversy when first put in, because they transform the rather austere classical look of the building.  They're spectacular.  We also found John Donne's memorial (he preached at St. Paul's, but the pre-Fire one, and his memorial was saved and moved to the new one.  He posed for this, and he's wearing a shroud), and one to Samuel Johnson in which he is portrayed in a toga! 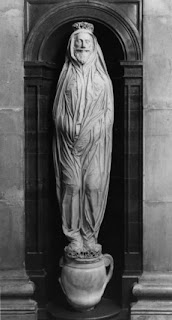 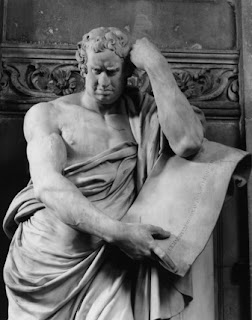 The crypt, though, is where you go to see a whole lot of memorials.  We saw lots of familiar names, including a bunch of pre-Raphaelite artists, but the biggest ones are for military heroes--especially Wellington and even more especially Nelson.  Each of them gets a room--with nautical mosaic floors--and massively ornate tomb, surrounded by memorials to their various fellows.  Nelson is right under the dome.

By the time we left, it was high time we had some lunch, and we found a fish and chip shop around the corner.  It turned out to be the fanciest fish and chip place you ever saw, and the food was pretty great.  We had sticky toffee pudding too.  (Most of the time, we did not eat in restaurants; the UK is now chock-full of places selling ready-cut sandwiches for cheap, in grocery stores and such.  They were always fresh, yummy, and inexpensive.  We ate a LOT of sandwiches, and I met Coronation chicken, which I'd never had before.  It's a sort of mild curry chicken salad invented for the coronation in 1953.) 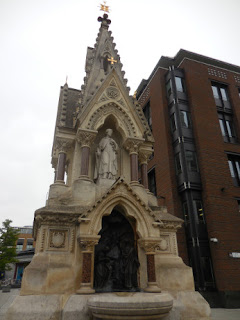 We hunted out an odd little fountain we'd seen from the balcony of St. Paul's (it turned out to be a restored medieval fountain featuring Moses, Mary Magdalene, and I think St. Lawrence), and then took to Tube to Bloomsbury to visit the British Museum.  It was Friday, so the museum would stay open late, and we could spend hours.  On the way, we spotted a house Caldecott had lived in, which is now, appropriately, a bookshop.

The British Museum was, of course, massively overwhelming.  My older daughter would be perfectly happy to live there forever, and it seemed like every time we turned a corner, some incredibly important artifact would be sitting there.  Babylonian winged bulls, the Rosetta Stone, the Elgin marbles (that is, friezes from the Parthenon), the head of Hesiod from my book covers (I spotted him from a ways away and yelled, "Look, it's Hesiod!"), all sorts of things.  Lots of mummies, of course, but those rooms were so very crowded that it was difficult to get around.  The Egypt rooms were stuffed with items my kids recognized from their books.  Oh look, there's the mummy cat that appears in every book!  And THEN we got to the room with the Sutton Hoo hoard, and the Lewis chessmen...it was ridiculous.  I also took the girls into a special exhibit of artifacts found in a submerged Roman-Egyptian city. 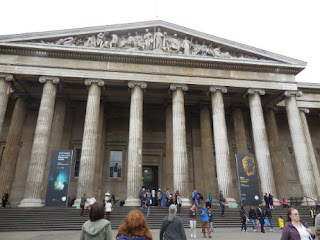 It was a massively exhausting day, and I resolved to make everyone take it easier the next day, but easier said than done!