UK Trip: From the Start: Tower of London and British Library

By Jean - June 19, 2016
Hey everybody, we're back!  My mom and I took my two daughters on a two-week trip to the UK.  You see, my oldest daughter is nearly 16 and pretty soon, she'll be out on her own.  We weren't very able to take the kids on trips when they were younger, so my husband and I thought we'd better do something before it was too late.  Next thing you know, we'd planned the trip of a lifetime (and husband, who couldn't go because he'd just started a new job, was very supportive of the rest of us having fun without him).  I'm going to blog about the trip, and I guess I'll just get started and see what shape it all takes on.

Once we'd gotten the traveling part out of the way, we settled into a little hotel in the Earl's Court neighborhood, happily close to the Tube station and some convenient grocery stores.  We explored a little bit, but couldn't do much, so that's Day 0.

On our first proper day, we started off with the Tower of London.  Actually, we started by looking for London Stone, which is (they think) an ancient stone, possibly Roman, that once marked the center of London.  It's been living in a sort of case near Cannon Street, but as soon as we found the spot, a passerby informed us that it's been moved to the Museum of London while the host building undergoes renovation.  I know it was going to be moved, but I didn't think it would be so soon!

We also walked by the Wren monument to the Great Fire of 1666, but it's closed for renovation too.  St. Magnus the Martyr Church--also closed, so we just walked along the riverfront and saw a few historic sites along the way.

We arrived at the Tower, but popped in to a church, All Hallows by the Tower, first.  It's the oldest in London, but suffered in the Blitz.  There's a Saxon arch, and a neat museum in the crypt.  We then walked around the park near the Tower, which has a large memorial to the Merchant Navy and is the spot where people such as Thomas More were publicly executed.  There is also a piece of the old London Wall nearby; the lower part is Roman and the higher part medieval.  And there's a statue of Trajan.  By this time, it was actually time for the walking tour of the Tower that we were planning to join, so we headed off to that.

The walking tour was interesting, though the first part went over the park we'd just been looking at.  On our way in, there was quite a sensation as everybody noticed the drawbridge at Tower Bridge going up to let a cruise ship through, which is quite rare these days.   After that we entered the Tower and the guide took us around and talked about things.  It was entertaining, but did not involve going inside any of the buildings.  I think our guide was a bit pro-Richard III; I can't really see why anyone would be, but sure, why not.  After that, we actually did go around the buildings.  The whole crown jewels display was redone a few years ago, and it's pretty nice.  Lots of things have been redone, in fact, so that now there's a Walter Raleigh room and a nice medieval museum with a display about Edward I.  I especially liked Beauchamp Tower, which has a lot of graffiti carved by prisoners.  There were also several re-enactment actors wandering around, and they're impressively professional, with really nice costumes.  We met Anne Boleyn and Elizabeth Woodville, and Sir Walter Raleigh was running around as well. 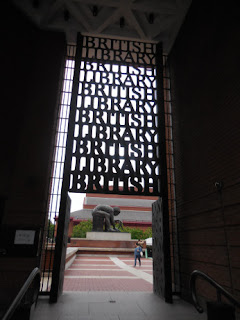 Around mid-afternoon, we took the tube to King's Cross and visited the British Library, which is in a large new building.  We spent a long time looking at the exhibits, and saw so many treasures!  There was music (the score for 'Sumer is icumen in,' Handel's manuscript of the Hallelujah chorus), history (a copy of Magna Carta, letters from various sovereigns, Charles I's death-warrant), and literature: a biography of Chaucer with the famous portrait, Jane Austen's writing desk, manuscripts from Austen, Bronte, Dickens, and so on....and much more, quite enough to melt the literary brain.  We also explored the public parts of the building; it's six stories, and in the center, there's a sort of tower of books which turned out to be the literal core of the collection--the King's Library, which were George III's books that became the British Library. (I could also tell you about the Cotton collection and so on, but that would get a little too librarian-nerdy....) 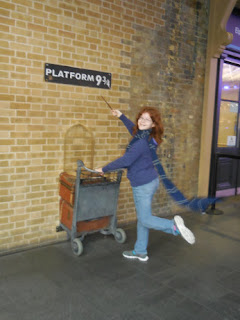 By this time, we were exhausted and way past foot-sore, but we just had to look for Platform 9 3/4 at King's Cross Station, right?  I knew there was a luggage cart halfway into the wall, but I didn't realize (because I'm not too bright) that of course, it was connected to the Platform 9 3/4 gift shop and involves waiting in line for 45 minutes.  The shop provides a scarf and wand, and takes a photo you can purchase for the low price of ‎£25, but you can also take personal photos alongside.  The photographers are impressively enthusiastic.