By Jean - June 20, 2016
Day two:  This was the coldest day!  For a good part of our trip, the weather was cool and a bit showery, and I was more than okay with that (my hometown was having 95+ degree days, and I was thrilled to be missing them, as I happily told every Brit that tried to apologize to me for the weather).  This day was really cold and windy, though, and even I got a bit chilled.  We spent the day in the Whitehall neighborhood, mostly; first we took the tube to Embankment station so that we could walk by Charing Cross (which is a Victorian re-enactment of a medieval memorial to Edward I's wife Eleanor) and Lord Nelson up on his column before going to Westminster.  Walking down Whitehall, I was overwhelmed by buildings, statues, and massive monuments to the glories of Empire.  It's actually a bit disconcerting; it's so at odds with how we think today that is actually a bit surprising to come upon statues of, say, Clive of India. 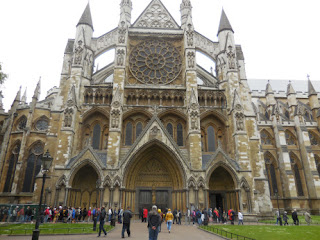 Westminster Abbey is also overwhelming.  It's a glorious, huge medieval church, and it's also a hodgepodge of monuments and memorials to everyone you've ever heard of (and a lot you haven't), all piled up on top of each other.  You aren't allowed to take photos, so I don't have any to share.  These days tourists are directed through a particular route, so first there are lots of elaborate 18th-century things with allegories about death and resurrection, or the person's eminence in life (Neptune was a favorite figure, signifying dominion over the ocean), and so on.  Prime Ministers galore.  Tombs of eminent scientists.  Finally, we got to the central altar, which is where the cosmati pavement is.  I have a thing for this pavement (see this post), so I stood there looking at it for quite a long time.

After that, it was royalty time.  The kings and queens are mostly at one end of the church.  Elizabeth has a hugely fancy tomb with her sister Mary stuck in at the side.  Then it's on to Poet's Corner, where you can visit Chaucer, Johnson, and Handel, along with memorials to many others.  I snuck back to see the pavement again before we went in the direction of the exit, still seeing famous names at every other step (Isaac Watts! The Wesley brothers!).  We could not get in to see the chapter house, because--if you can believe it--it was closed for a Gucci photo shoot.  We could hear recordings of the Abbey choir coming from the room.  Odd.

After that, we visited the Jewel Tower, which is all that's left of a once-large medieval complex; now, it's just three rooms stacked onto a spiral staircase.  It's beautifully preserved, because it was used mainly as storage, so nobody ever bothered to mess it up by making it more stylish.


We walked around the neighborhood--we had meant to peek into Parliament, but there was a lot of fenced-off area for construction and no visible means of getting in, so we dropped it and took a look at Westminster Bridge instead.  After getting thoroughly chilled in the wind, we walked back up Whitehall and waited in line for the Churchill War Rooms. 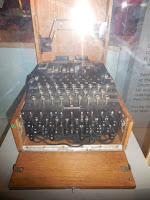 The War Rooms is a museum located in the actual underground rooms that served as Britain's nerve center during the war.  It's a massive warren, quite a bit bigger than I expected!  There are map rooms and telephones and offices and bedrooms.  They've recently added a second museum that is just about Churchill's life, and it's really interesting too, though we were so footsore by then that we sort of skipped the more youthful sections.  I particularly liked the Enigma machine.  I bought a great book about wartime posters at the shop, and a tea towel.


We then walked past the Horse Guards arena, where they were preparing for some massive event.  Police everywhere (and some carrying guns like I'd only expect to see on South American police!), and flags for every country in the Commonwealth.  In fact, come to think of it, there were a truly remarkable number of flags all over the place.  Union Jacks all down the Mall, Royal Navy flags all over Admiralty Arch...it eventually dawned on us that it was Coronation Day and there was going to be some sort of big event.  Admiralty Arch, by the way, is proof that you can make an allegorical representation of just about anything; it has two statues, of Gunnery and Navigation.

We weren't done yet!  After a little rest and snack, we popped into St. Martin's in the Fields, where someone was rehearsing on a harpsichord, and took a look at the cafe in the crypt.  Then we crossed the street to Trafalgar Square, which is very crowded indeed.  That's where you go to see street performers, so my daughters got free rings made by a fellow who does that, and there was plenty of music (I like the music, but I'm not so wild about the amplifiers they all have now).  The latest thing in street performing is levitation.  There were three separate Yodas, and three or four other characters, all 'floating' and letting kids take pictures with them.  We took pictures with the lions below Lord Nelson, and left it at that. 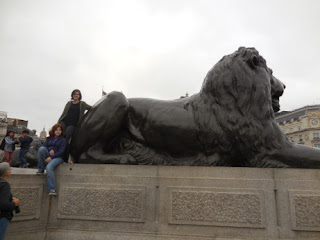 Finally, we went to the Waterstones across the street--a wonderful bookstore, at which I could not spend nearly as much money as I would have liked.  First things first: I looked in the children's section for DWJ books and found two that needed replacing in my own collection, woohoo!  My Power of Three was bought 20 years ago, last time I was in the UK, and pages are falling out, so it was good to get a new one.  I bonded with the girl at the register over our mutual DWJ love.