The Story of Layla and Majnun 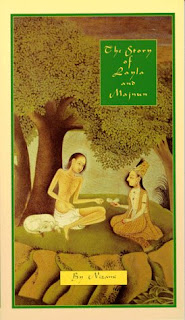 The Story of Layla and Majnun, by Nizami


Layla and Majnun is one of the world's great love stories, akin to Romeo and Juliet or...Aeneas and Dido, maybe.  The story dates from around the 7th century AD, and various versions of it were floating around until Nizami, a Persian poet, collected and shaped the material into one long marrative poem in 1188.  After that, the story's popularity spread across a couple of continents and is still influential today.  The introduction in my copy speculates that the lovers may have been real people who became legendary.

Layla and Qays know each other from childhood; both are Bedouin, though belonging to different tribes.  They fall in love as children, but when they grow older and Layla's parents realize that she is already attracting boys, they keep her sequestered in the family tent.  Layla, imprisoned, must act as though all is well.  Qays, however, starts reciting poetry in public and acting like a madman, which earns him the nickname Majnun (madman).  Without his Layla, he cannot care for anything else.  Eventually he runs off into the wilderness, becoming a sort of hermit and forgetting to eat.  He cares only to compose poetry that he hopes the wind will carry to his love.

This all kind of backfires on him, because his father goes to propose a marriage between the two lovers, and Layla's father refuses on the grounds that Majnun goes around acting crazy all the time.  If not for that, it would be fine.

So Layla gets married off to a very nice, very rich princely kind of guy, who then loves her so much that he puts up with her refusal of him.  Majnun goes back to hermiting and gathers wild animals around him, who are tamed by his gentleness and devotion to Love.   Then everybody dies.

The part I liked best was where they exchange a couple of letters, and Layla points out that Majnun is free to act however he wants, whereas she, as a woman, is confined to the role she must play.  He gets all the attention, and she mostly gets to suffer in silence.

I guess I'm not good at appreciating great romances.  But now I know the story.