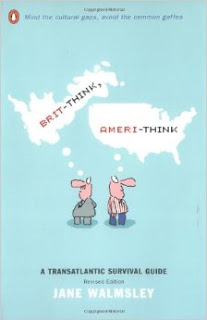 Jane Walmsley is an American who moved to the UK in the 70s and married a British person there.  As such, she is well-placed to write this little book that pokes fun at the cultural differences between the US and the UK, and which purports to explain us to each other.  It probably does no such thing, but it's fun to read.

What both sides really fail to understand are the basics--the cultural themes, the habits of mind which determine the way the other guys behave.  In order that I may never again have to explain why Brits form orderly queues, or why Yanks insist that you 'have a nice day' whether you want one or not, I have written Brit-think, Ameri-think.


There are the usual sections on food, TV, children, homes, and so on.  It's all fun and lighthearted, and since my edition dates from 2003, a bit outdated.  The world has changed quickly!
comedy non-fiction Re-Reading Challenge