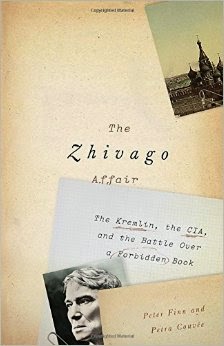 The Zhivago Affair: the Kremlin, the CIA, and the Battle Over a Forbidden Book, by Peter Finn and Petra Couvee

The novel Dr. Zhivago has an amazing history!  Boris Pasternak was a beloved Russian poet, and he had this tendency to slither out of committing himself to Soviet demands.  He would fail to sign denunciations and so on, but Stalin kind of liked him anyway so he was relatively safe for a long time.  When Pasternak decided to write a novel about the civil war after the Bolshevik revolution, though, and he was putting in all this stuff about the value of the individual, Soviet authorities decided that they were not going to publish anything like that.  As a result, this highly-anticipated masterwork was smuggled out of the USSR (in a move of incredible slickness and luck) and published abroad.  And then the CIA decided to publish it too!

This is a really interesting history, covering Pasternak's life (and many loves), reactions to Dr. Zhivago, the Nobel Prize that sort of wasn't, and the consequences inflicted on Pasternak and his loved ones.  It's good stuff.

Pasternak himself is quite a character, though he must have been pretty awful to live with.  Apparently he was incredibly charming, but on the other hand, he went through two wives and a mistress, and he was a little too assured of his own genius for that to be very charming.

I had no idea of the stuff the CIA got up to during the Cold War.  That was fascinating reading, and worth reading all on its own.  They had figured out that they couldn't do anything terribly overt (like, say, saving oppressed Hungarians) without sparking a nuclear war, so they put an incredible amount of energy into...spreading ideas.  The CIA printed and smuggled as many books behind the Iron Curtain as they could--classic and modern literary works--because Soviet citizens were avid for them, and because the CIA wanted to spread ideas around.  Any ideas that involved the possibility for people to disagree and yet live together.  It also sponsored cultural events of all kinds, and ran Radio Free Europe and so on.  (I'm sure there was plenty of spying too, but this was focused on cultural stuff.)

I enjoyed reading this a lot.  And to finish, my favorite line:


...the conversation seemed to achieve the remarkable feat of leaving Trotsky a little flabbergasted.