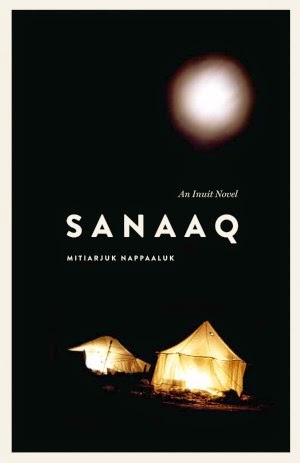 This book is one of the perks of my job.  Now that I get to buy literature, I can spend time searching for books from all over the world, and I can find neat stuff like this!

Sanaaq is an Inuit novel, the first written in the language.  It started off as a vocabulary exercise.  In the early 1950s, a priest studying Inuttitut asked 22-year-old Mitiarjuk Nappaaluk, a respected member of the community, to write down some phrases for him to learn.  Instead of making a vocabulary list, Mitiarjuk starting writing little vignettes about Inuit life.  She invented characters, gave them a story, and over a period of years wrote an entire novel--without ever having read a novel in her life.  She re-invented the novel, in fact.

This is the story of the young widow Sanaaq, her young daughter Qumaq, and the people around them.  They go about their everyday lives, hunting, building, and producing just about everything they use.   There are accidents, marriages, good days and bad, and every so often the changing background of Inuit life shows up in encounters with the qallunaat (white people, literally Big Eyebrows, which is an excellent name)--missionaries, hospitals, and work away from home.

Nappaaluk's writing is economical and energetic, with a lot of dialogue.  There is not a lot of dwelling on emotional development or deep thoughts; it's there, but she puts it into a sentence or two instead of a whole page.  All the Inuit terms for objects and relationships are left in--that was the original point, after all, and is an integral part of the novel--so be prepared to look up a lot of words in the handy glossary.

It's a very cool read.  I enjoyed it a lot and recommend it.  Besides, can you resist that cover?  No, you can't.
Translation Challenge