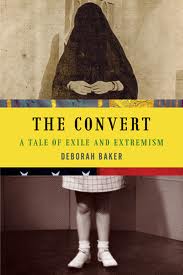 The Convert: a Tale of Exile and Extremism, by Deborah Baker

Deborah Baker found a box of letters and documents in a library archive and was drawn into the story of how Peggy Marcus, a Jewish girl from the suburbs, became Maryam Jameelah, a vocally conservative Muslim writer.  It was 1962 when Peggy changed to Maryam and left her New York hometown forever in order to live in Pakistan and help build an ideal Islamic society--which is pretty amazing when you consider that she didn't actually know any Muslims in her community.  The world she was born into could not have been further removed from what she wanted out of life.  The story is far more complex than it seems at first, though, and by the end I was left wondering about a lot of things.

Maryam Jameelah's life story is hard to put down.  Baker braids together the letters, her research, history, and eventually meetings with Jameelah herself in an effort to understand it.

I'm having a hard time figuring out what to say about this book.  But it was a great read and I'll be thinking about it for quite a while.