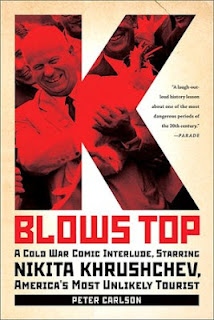 This is a pretty irresistible book.  In 1959, at the height of the Cold War, President Eisenhower sort of accidentally invited Khrushchev to visit the United States for a couple of weeks.  The visit was a surreal media circus that defied belief!  It's amazing to read about.  All these unbelievable things happen and there's something new and strange every couple of pages.

Khrushchev was a dictator responsible for the deaths of thousands (at least).  He was also a shameless ham who knew how to work a crowd and get laughs.  And he had a really bad temper and could destroy the world if he felt like it.   It was an interesting combination for the nervous Americans taking him around the country.  Carlson comments:


[Khrushchev] recognized that his trip was not just a diplomatic journey; it was an opportunity to put on a TV show starring himself as the folksy, funny populist leader of the dynamic new Communist world.


Carlson documents the trip and the circumstances around it, beginning with VP Nixon's visit to the USSR and the preparation for Khrushchev's tour, all the way to the aftermath and the decline in relations that occurred a year or so later.  Khrushchev then came to the US again for a UN gathering, which is where he pulled the famous shoe-banging stunt.  It's all in there.

Funny and frightening all at once, this is a book that shines a really interesting light on an odd chapter in the Cold War.
150+ Challenge 52 books