Week 23: A Natural History of Latin 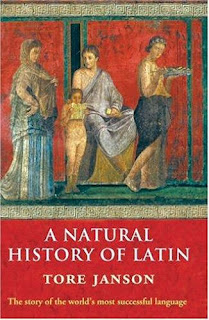 A Natural History of Latin, by Tore Janson

Tore Janson gives a nice digestible history of the Latin language, from its pre-Roman origins up through the present day. It's interesting that the book is translated from the Swedish--it must be a lot of work to translate a book about language like that, since all the examples have to be re-done.

The only thing I objected to with Janson's writing is his habit of telling us all about his moral disapproval of Roman practices. He'll describe something like the massacre of a million Gauls, and--unsure that we will realize that it's a bad thing to massacre Gauls--then he'll point out that it's genocide and he doesn't approve of it. He takes great pains to make sure we know. It's irritating.

Aside from that, though, it was a good short history of the Latin language, and if you want to understand why Latin is still useful even today, it's a good title to read.
52 books