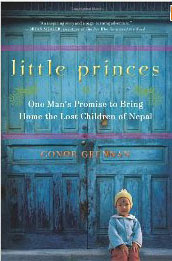 Little Princes: One Man's Promise to Bring Home the Lost Children of Nepal, by Conor Grennan

Conor Grennan had a bunch of money saved up and wanted to take a trip around the world, and he decided to kick it off with a couple of months volunteering in Nepal at an orphanage. Soon enough, he'd decided to go back and spend more time there. Then he realized that most of the kids at the orphanage weren't orphans at all; their parents had paid to have them taken out of their war-torn, dangerous homes and sent to school, but instead they'd been abandoned. And then he decided to start a children's home himself and try to rescue a few of the many Nepalese children living in slavery, and even to reunite some of the children with their parents.

I'm a bit worried that this book is going to suffer from the fallout around Greg Mortenson, the Three Cups of Tea guy. It's a similar story--guy runs into needy children almost by chance and ends up dedicating his life to them, and you can donate--and the timing is unfortunate. But I hope this book will not end up under a cloud of suspicion in the same way, just because it was published at the wrong time. Grennan writes this story himself, and he comes off as more real than Mortenson did; he's very honest about his failings and his original motives for volunteering at an orphanage (to impress girls, and to make it look less selfish to spend a year traveling).

Grennan describes a situation that I didn't know anything about. Nepal has been torn apart by civil war over the past decade; it was the Maoist rebels against the royal family (there are still Maoists?!). In areas controlled by the rebels, the Maoist army was forcing men from every family to join up, and once they ran out of men, they starting taking children. Tiny boys were taken from their families and raised to become soldiers and servants. Families desperate to save their children wound up selling everything they had for money to pay con men who promised to take their sons to safety in Kathmandu. The boys would be safe, they would go to school, they would be able to eat. But in reality, the children were either abandoned entirely or forced into slavery, and they were too afraid to tell anyone that they weren't orphans. The lucky ones ended up in orphanages; many still live in slavery.

So it was really neat to read about how the author got to know all the kids and then managed to find several of their families. It's a mostly heartbreaking story, but there's a lot of hope too. I highly recommend this book.
52 books read around the world