Take a Chance: The Pedant and the Shuffly 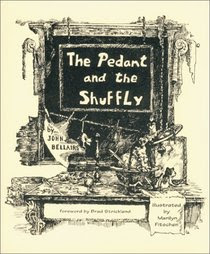 The Pedant and the Shuffly, by John Bellairs

6: Book Seer Pick: Go to The Book Seer and follow the instructions there. Read a book from the list it generates for you.

I had just finished reading John Bellairs' The Face in the Frost, so I entered that title in hopes of finding a similarly fun Gothic writer, but all the Book Seer returned was a list of Bellairs titles. I've read all of them, except for The Pedant and the Shuffly, which I've always kind of wanted to read, so I got hold of that.

It's quite a short little oddball fairy-tale type story--the closest thing I can think of is James Thurber's The 13 Clocks. The evil wizard Snodrog the Pedant has a habit of collaring people who pass by his house, whereupon he uses his horrible logic to convince them they don't exist. They either disappear or become Flimsies, stained handkerchiefs forced to do his evil bidding. Then one day his designated victim brings a Shuffly along, and the fun begins.


I was a little disappointed in this suggestion from the Book Seer, since I was hoping for something that wasn't by the same author, but I'll try it again sometime. I think usually it comes up with more.
Take a Chance