Week 25: Beautiful Girlhood and Mistakes Were Made... 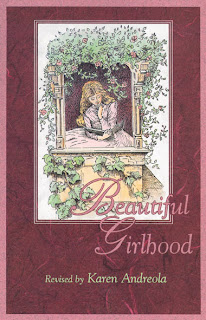 Beautiful Girlhood, by Mabel Hale, revised by Karen Andreola
This rather romantic growing-up book for young teenage girls was first written in 1922. It is very much something you imagine Anne Shirley reading and taking to heart (it may have been old-fashioned even when it was new). Karen Andreola, who is best known as the major name in Charlotte Mason education, kept the flowery Victorian language but took out anything that had dated particularly badly and added a few updates. It was not usually easy for me to tell where she edited.
Much of the basic advice in the book is still quite applicable today, even if most modern girls would balk at the tone. Quite a lot of it is about honesty, consideration for others, popularity, getting along with your parents, and so on. If you take the spirit and not the letter of the advice, it's just fine.
I rather enjoyed reading it and gave it to my 9-year-old daughter to read as well, thinking she would like reading something Anne would have read, and she said she liked it. 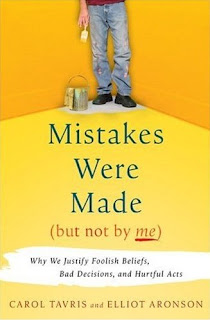 Mistakes were made...but not by me, by Carol Tavris and Elliot Aronson
Tavris and Aronson come up with case study after case study to explain "why we justify foolish beliefs, bad decisions, and hurtful acts." It comes down to self-justification--the desire deep within each of us to avoid having to admit that we made a mistake or chose a wrong action. Why will people continue to give money to a con artist long after it's completely obvious they're being scammed? Why do we see and condemn hypocrisy in others but don't notice it in ourselves? Why do people do horrible things to one another without feeling bad about it? Because it's often really, really hard to admit--or sometimes even to notice--that we've been fooled or done wrong, and it's fatally easy to downplay our wrong actions and justify them to ourselves.
I found this book to be really interesting, and would recommend it to others. It can be so hard to understand why some people do such obviously awful things, and this book really helps to explain it. It also makes you take a good hard look at some of the things you've been up to yourself.
52 books