Week 24: Quiverfull and The Red Pyramid 
I don't think that many people in my area of the world know very much about the Quiverfull movement. Lately I've been interested in understanding it, and the tragic Schatz case made me feel more strongly that this is something more of us should be aware of. Quiverfull is one term for a growing movement among very conservative Protestants, which emphasizes wifely submission, male headship, and "openness" to children, which can frequently translate to having as many as physically possible because it's a sign of righteousness. Adherents also homeschool, try to live as self-sufficiently as possible, and are usually quite isolationist. Women bear the heavy burdens that go with the lifestyle--but wives are also frequently the ones who are attracted to it in the first place and who pull their husbands in.

Joyce explains some of the history behind the movement and the major players. This was very helpful to me since, as a homeschooler, I have often heard some of the names mentioned before but was ignorant of exactly who they were. I've seen Vision Forum at conventions and seen their catalog (full of amazingly sexist toys for children), but I didn't know that the leader, Doug Phillips, preaches an extreme form of submission, advising girls to stay home and serve their fathers until marriage, and to submit not only to their fathers but also their brothers, regardless of age. Nor did I know that the woman who designs Sense and Sensibility patterns (which I have purchased in the past) also writes for Vision Forum! So the book really helped me to make sense of all the small glimpses I've had.

Joyce does not comment very much on the people she describes. She just quotes them and lets them explain themselves, without giving very much of her own opinion. This is just fine, and I think perhaps too much commentary would have been superfluous. She also interviews a couple of women who were prominent in the Quiverfull world but have since left. Leaving is quite a long and painful process for many women, who often find themselves penniless and without job skills, with many children to feed.

I appreciated this overview of the Quiverfull movement and would recommend it to those trying to understand patriarchalist fundamentalists. 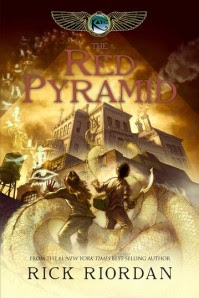 The Red Pyramid, by Rick Riordan

Rick Riordan is kicking off a new mythology-based series, and our book club decided to read it for a fun summer book this month. It's the story of two siblings, raised separately, who find themselves forced to work together in the middle of a crisis of the Egyptian gods. Their father has been captured by Set, and they must try to restore ma'at (cosmic order) and stop Set from unleashing chaos across the world. I quite enjoyed it, although it seemed a bit over-long --over 500 pages.
52 books book club