A Spring Riffle of Reviews

I'm going to give in and admit that I have more books to post about than time to post in.  Besides, it's a beautiful spring outside!  So here we go:

I continued my March Magics reading with Pyramids by Terry Pratchett, which I haven't read in many years.  It's an early one, about #7, and comes after Wyrd Sisters.  Pteppic, only son of the king of the narrow desert/river land Djelibeybi*, spends his youth in Ankh-Morpork, training as an assassin, but right after he survives his final exam, his father dies and he becomes king himself.  His ideas about bringing Djelibeybi into modern times are not welcomed; here, everything is done exactly as it has always been done, and head priest Dios is present to make sure of that.

This is such a fun story, absolutely packed with mayhem, humor, and satirical insight.  I really enjoyed revisiting it.

*A pun Americans may not get, since we don't have the British candy jelly babies -- which are basically gummy bears.  I don't think I got it the first time.

March finished with A Sudden Wild Magic, by Diana Wynne Jones, one of her few novels that is considered to be for adults.  It's also a title that is sometimes considered to be weaker than others, but personally I like it a lot, and it was an excellent re-read.  It is very complex, and I think more of the characters are complicated, faulty people who make mistakes.  Quite a few of them are pretty unlikable. The story:

British magic users have realized that the many problems besetting them for the last century have all been a set-up.  Somebody in an alternate reality is producing crises and observing the results, and so the Inner Ring sets up a mission to cross over and put a stop to it.  The Pentarchy is contending with crises too, and...well, there's plenty going on.  We meet more than one hungry mother figure, and the most important is one of the scariest DWJ-mothers I've ever met. 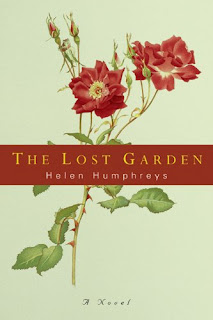 The Lost Garden, by Helen Humphries: This has been on my mental TBR for years, after somebody
recommended it.  I think.  I'm constantly getting it mixed up with Kate Morton's Forgotten Garden.  This story is set in 1941, as Gwen Davis, botanist and lonely person, heads out to a remote manor house to oversee a team of land girls, who will be planting useful food crops in the neglected grounds.  The house itself is filled with Canadian soldiers waiting for deployment, and of course quite a few relationships result.  Gwen discovers a truly secret garden that she works to bring back to life, and as she does so, she thinks about love, loss, and longing -- for herself and for the others.

This novel got high praise but somehow I just couldn't really connect with it.  It looks like something I'd love to read, but I didn't.  I kept waiting to enjoy it and that never happened.

The Cathedral of Mist, by Paul Willems -- well, that title.  I love that title.  I had to read that book.  It's a collection of Paul Willems' short stories, and he's billed as "one of the great Francophone Belgian fantasists."  He was best known as a playwright and also produced a few novels, but not much of his work has been translated into English.

"Requiem for Bread" features a boy who cannot forget the death of his favorite cousin, and spends his life imprisoned by his search for her -- until he finds out how to let her go.  "An Archbishop's Flight" is a literal flight of fancy, as the narrator finds a rare hat, flies with the Count into the forests of Finland, and is able to fulfill a daydream or two.  In "Cherepish," a scholar gets to know another one.  Hector "had a soul shaped like a fountain," but he confesses his longing for meaning in his life; surely it has all been futile and he feels no connection to his wife and children.  After his death, his wife writes a letter: what was her view of the family?  And there are others.

I really did wind up liking "The Cathedral of Mist" best, but all the stories were interesting.  It's a very short book, quite fast to read.

I also had some relaxing fun reading a few old favorite Three Investigators books.  They're like potato chips -- I can't read just one of them.

In other news, besides enjoying the weather, I've also been spending a good deal of time on some of my odder hobbies.  I'm in a class for embroidering a 17th-century-style casket (as in a small treasure box, not a large receptacle for the deceased).