The Secret of Zi 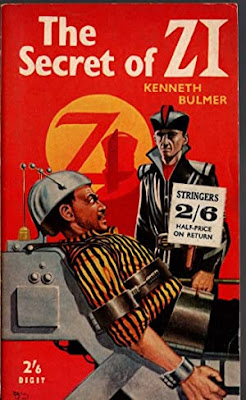 The Secret of Zi, by Kenneth Bulmer

I saw the UK cover of this SF paperback and immediately decided that I NEEDED to read it.  I mean, look at that fabulous image.  I eventually got hold of an e-copy.  It was probably impossible for a book to live up to that cover, but the story was decent, and I wish there was a sequel.

In the year 2025, Earth was taken over by the Alishang.  The aliens are far stronger than humans, and they had no trouble turning Earth into a client planet after a massively destructive attack.  Now, a few generations later, there are enough humans willing to work for the Alishang that there is little chance for rebellion.  But there is a secret underground, and its symbol is ZI.  Only four people in the whole world know ZI's plan or when it will trigger, but the ZI symbol is widely known.

Rupert is a ZI sleeper agent, newly activated.  Everything goes wrong and he ends up on the run with Liz, a psychiatrist.  Their adventures even take them to the home planet of the Alishang, and as they evade capture and work to push ZI forward, Rupert is eventually entrusted with the great secret.  ZI is about to happen.

So the story ends on the anticipation of ZI's imminent occurence.  I promptly looked for a sequel, but I sure couldn't find anything.  Kenneth Bulmer doesn't seem to have written very much.  Still, it was a fun read and an excellent choice for January.