Hooray, Kristen at We Be Reading is back for her 11th hosting of March Magics, the event in which we read and remember Diana Wynne Jones and Terry Pratchett.  I think we can all use a little magic this March, so this is a very welcome event, and the theme this year is "Friends Old and New." 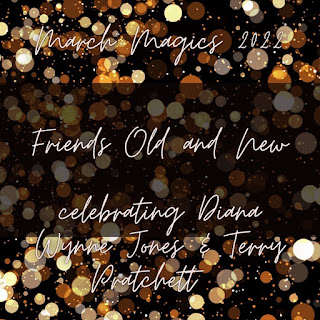 For DWJ, my old pick will be the first book I ever read, which is Witch's Business (aka Wilkins' Tooth).  It's also her first published story, not counting the early Changeover.  For new, I went with a couple of later titles that I haven't read as often as some, so they are new-ish: A Sudden Wild Magic, and the short stories in Unexpected Magic.  I feel like reading "The Master" again.

For Terry Pratchett, I chose Pyramids, which I haven't read since college in the 90s, and The Last Continent -- I can't remember when I read that one at all, though I know I have.

This will certainly make my March much more magic!  Are you going to join in?  I hope you will.