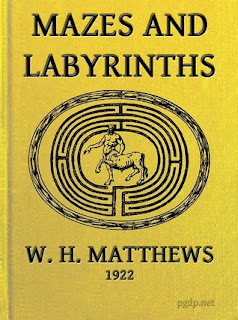 Mazes and Labyrinths: Their History and Development, by William Henry Matthews

I had so much fun reading this very long book about the history of mazes and labyrinths.  Matthews starts with the first place ever described (by Herodotus) as a labyrinth, which was a large Egyptian complex with a zillion rooms, but wasn't what we would think of as an official one.  It's long gone.

"Long gone" describes quite a few of the places described here, which is a real bummer.   I found out that a major candidate for the origin of the Minotaur's labyrinth on Crete was destroyed by the Nazis when they retreated; they were using it as an ammo dump and blew the whole place.

The Minotaur turns out to be a more popular figure than I had realized.   It seems to have been invoked constantly for centuries, right up through the Renaissance.

One of the nice things about the internet age is that when I read a description of a place, I can go look for it, unlike Matthews' original readers.  I spent a lot of time on Google Maps for this book!   I could go look up a garden or turf maze, I could look up churches with labyrinths in the floors, it was great.

Matthews discusses turf mazes quite a bit, and at first I was puzzled by how he spoke of them.  They have to be 'cut,' and I was having a hard time understanding what that meant and how the part that is cut is not the path.  So I spent a lot of time on Google Maps looking up various locations to understand.  A turf maze usually has the path on the grass, and you cut away the turf between the paths, as at this maze at Hilton in Cambridgeshire (which is only a few miles away from where we stayed on our trip!  We could have stopped and seen it!  Aigh!).  These things were also called Troy-towns or Julian's bowers, and people played some sort of game (probably several versions) on them for centuries, but there doesn't seem to be a lot known about it.  It's described as a race, or a dance, or procession.  Sometimes there were winners.  Matthews theorizes that it all went back to some sort of Neolithic ceremonial, of which Morris-dances are another descendant.

I also learned a lot about church labyrinths.  The one I made a quilt of is by far the most complex!*  Most of them were simpler and were sometimes called something like 'going to Jerusalem' -- maybe you could go through it on your knees as a pseudo-pilgrimage?

I probably spent just as much time online looking up labyrinths and locations and antique books as I did reading this history, and it was all a lot of fun.  Highly recommended to those interested in such things; nobody else would bother.

The quilt I made, just last year, is a copy of the labyrinth that was once in the Abbey of St. Bertin, in the town of St. Omer in France.  It turned out too large to hang up on my wall, and currently lives, folded up, on a wooden chest.  What a lunatic project, hm?  I had a lot of fun with that, and will probably enter it in the guild quilt show -- which has been put off until November of 2022, since the guild, consisting almost entirely of little old ladies, hasn't been able to do any of the work we would usually have gotten done by now. 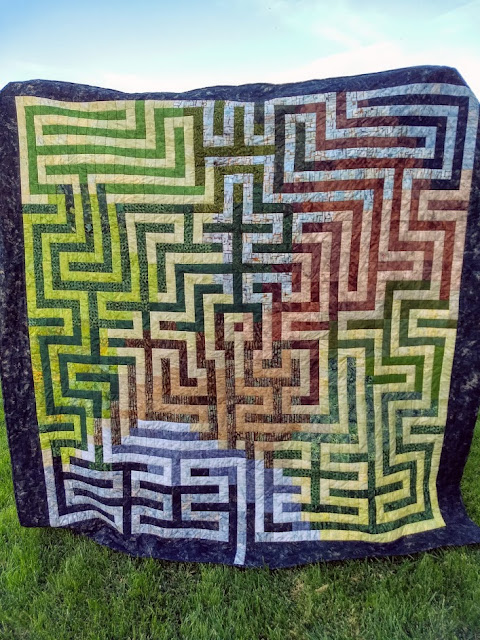