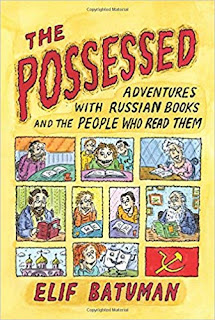 The Possessed: Adventures With Russian Books and the People Who Read Them, by Elif Batuman

This was such a fun book -- at least, if you like Russian literature, or wry stories about oddball academics, or information about Uzbekistan.  I like all of those things.

Elif Batuman writes a sort of memoirish thing about her time in grad school -- some chapters were originally articles, so it's not always a smooth narrative, but it sure is fun.  Instead of writing a novel, she ends up at Stanford studying Russian literature. And then she goes to a conference on Tolstoy, right at Tolstoy's estate!  Eccentric academics abound, Batuman formulates a theory that Tolstoy was murdered, and fun is had by all.  It's finished off by a group dinner so strange and uncomfortable that a faculty member despairingly groans  "It was a dinner from Dostoevsky, that's all."

There is some quite fascinating stuff about Isaac Babel, a library display, King Kong, and Soviet propaganda posters.  I bet you didn't know that King Kong has a connection to Isaac Babel!  I sure didn't.

Much of the book is not about Russian literature, or Russia, at all.  Quite a large chunk is devoted to an intensive language-study stay in Uzbekistan, and the very interesting people there, and Old Uzbek literature. ("Dilorom and I were studying the lesser Old Uzbek scholar-poets.  Most of them were either madmen or saints.")

Then there is some really lunatic stuff about Peter the Great's niece, Anna Ioannovna.  Wow.


“While it's true that, as Tolstoy observed, every unhappy family is unhappy in its own way, and everyone on planet Earth, vale of tears that it is, is certainly entitled to the specificity of his or her suffering, one nonetheless likes to think that literature has the power to render comprehensible different kinds of unhappiness. If it can't do that, what's it good for?  On these grounds I once became impatient with a colleague at a conference, who was trying to convince me that the Red Cavalry cycle would never be totally accessible to me because of Lyutov's "specifically Jewish alienation."
"Right," I finally said.  "As a six-foot-tall first-generation Turkish woman growing up in New Jersey, I cannot possibly know as much about alienation as you, a short American Jew."
He nodded: "So you see the problem."

...I [was] ambiguously positioned between Turkey and the exasperating twentieth-century discourse of "shoestring travel": the quest for an idyll where, for three U.S. dollars, Mustafa would serve you a home-cooked meal and tell you about his hair collection.  The worst part of this discourse was its specious left-wing rhetoric, as if it were a form of "sticking it to the man" to reject a chain motel in favor of a cold-water pension completely filled with owls.

[on her surprise at finding that Uzbek actually is related to Turkish, as an eccentric uncle had always asserted]
...in my experience, Turkish people thought that every language was close to our Turkish language.  Many times I had been told that Hungarian was related to Turkish, that the Hungarians and Turks descended from the same Altaic peoples, that Attila the Hun was Turkish, and so on.  When I went to Hungary, however, I discovered that Hungarians do not share these beliefs at all.  "Of course we have some Turkish words in our language," they would say.  "For example, handcuffs.  But that's because you occupied our country for four hundred years."

I enjoyed this one a lot; it's just so much fun.  You don't even have to be terribly interested in Russian literature, just willing to put up with a lot of mentions of Pushkin.  Highly recommended.
books memoir/biography TBR challenge