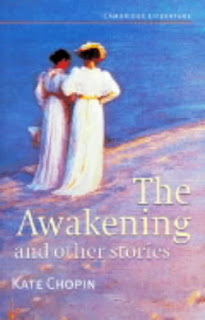 The Awakening, by Kate Chopin

This is one of those books that I'm embarrassed not to have read earlier.  I think all the other lit majors I knew owned copies, and I started it at a friend's place, but promptly ran into the nursemaid being called "the quadroon" all the time.  I had no idea what that even meant--it was a nonsense word to me--but the whole story felt completely alien and I dropped it.  But I've finally done it--I've read one of the founding texts of both American feminist and Southern literature.  So there.


Edna Pontellier is a beautiful and wealthy New Orleans matron, spending the summer at a resort with family and friends.  She has never thought about who she is or what she wants; she simply occupies her place in society.  But then, she falls in love and discovers physical desire and a wish to be independent, on her own.  She stops playing her role and goes into art instead.  Edna 'awakens' into an awareness of herself and a desire to be different.

Chopin's writing is intensely physical, especially around Edna.  We hear a lot about her round arms and white flesh, her walk, her sleep, her hair, and her joy in swimming and being in the water.  I almost feel that I know a lot more about her body than about her mind.  She only sort of has a mind, it seems to me; she's only just beginning to use it and she's not always good at it.  Her emotions trample her sense.

The famous quotation from this story is "The bird that would soar above the level plain of tradition and prejudice must have strong wings."  Edna wants to be different, to decide her own life and to be independent, but she makes some bad choices (I think) and she does not have wings strong enough to carry her through the difficulties.  I'm afraid I find myself impatient with her; does she even want to have this affair with Arobin?  He mostly talks her into it.  Does she have any clue about who her children are?  She seems to love them in this physical way but not otherwise.  (I had a similar reaction to A Doll's House; it's all very well to find your own identity but why abandon your children while you do it?  They need you.  Step up already.)

Kate Chopin is considered to figure in the Naturalist writing style, which is after all the August theme.  Naturalist writers thought about societal structures and what people do within them, looking for the reasons behind actions.  That's a pretty good description of Chopin.

My copy is a free digital download, but I picked this cover because of the painting.  I think most people have seen it around, but it is by P.S. Krøyer, a Norwegian painter who spent a lot of time at Skagen.  I've been to Skagen, which is a really neat spot; it's very flat and shallow, so you can walk a long way out and the water will still only be to your knees.  It's the end of the Danish peninsula where two seas meet, so that there are two sets of waves that cross each other, going way far out.

I've now started my September choice, Dostoyevsky's Brothers Karamazov.  It's beautiful, I love it, but there is no way I will finish by the end of September!
American literature Literary Movements Challenge