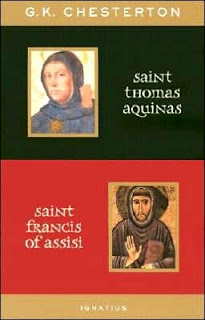 Some years ago, on a Chesterton kick, I bought this double edition of two biographical sketches.  Then I realized that I can only read so much of him at a time, and the book has been sitting on a shelf ever since, waiting for me.  I enjoy Chesterton, but his trademark paradoxical style gets to me after a while.

The book on Thomas Aquinas is pretty interesting, and the funny thing about it is how very little biographical information is in it.  This is in no way an ordinary biography with details about when and where events took place.  There is very little of that, and none of it is in chronological order.  Mostly Chesterton draws a sketch--rather a haphazard one--of Aquinas' time, his personality, and most especially his philosophy and theology.  And he often goes off into Chestertonian flights of fancy, too, of course.

I don't quite feel like I have a good handle on Aquinas' life details or anything, but if Chesterton's descriptions are accurate (and who knows about that?) then I'd recognize him if he walked down my street.


The St. Francis book was written just after Chesterton's conversion to Catholicism, and starts off with a very interesting (and typical of GKC) description of the temper of the 12th and 13th centuries.  He goes on to write a character sketch similar to the previous one, but with a completely different mood that expresses his feeling about Francis and his world, which was very different.  Again, I still don't know much about Francis' biography, but I'd recognize him.

Overall a very good book; it just has to be taken slowly if Chesterton starts to wear on you after a while.