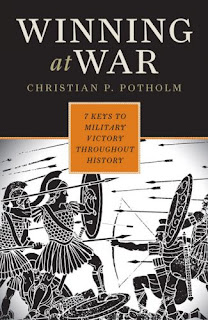 This is a much more serious and dense book than the others I've been reading lately, and it's taken me a while to read. It's a study of how to win at war. Potholm sets out seven rules for winning, and gives plenty of examples from history of armies that have obeyed each rule, or not. The elements he identifies are technology, sustained ruthlessness, discipline, receptivity to innovation, protection of military capital from civilians and rulers, will, and the belief that there will always be another war.

One thing that Potholm tries to make clear is that there really will always be another war, and that countries that do not prepare for that usually end up paying the price in human lives.

It's a really fascinating book, and I'd recommend it to those interested in history.
52 books