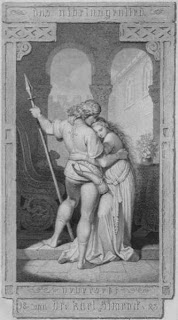 I finally finished both the medieval literature books I've been working on.

The first is the Nibelungenlied, a long poem written at the very end of the 12th century. It's based on German and Scandinavian legend, and served as a source for Wagner's Ring cycle. The story is in two parts: the first half tells the story of Sifrid (Siegfried in Wagner), a great hero and dragon-slayer who owns a magic treasure. He helps his friend to win the maiden Brunnhilde, so that he can marry Kriemhilde. But after the two queens have an argument, Sifrid is betrayed and murdered. The second half of the story tells of Kriemhilde's grief and quest for vengeance, which destroys pretty well everyone. I think Hamlet had more survivors.

I also read The Book of Margery Kempe, a sort of autobiography by a 14th-century woman who had religious visions. After raising a large family, she dedicated herself to worship and went on some pilgrimages. She constantly wept and sobbed--for hours at a time--with religious fervor, and after a trip to Jerusalem, she started shrieking as well. This naturally tended to annoy the people around her, and much of her account revolves around her difficulties getting along with others. The book is her dictation to a priest, and it's fairly rambling; there isn't much in the way of chronology or order.

Some of the book is quite interesting, but it's also very repetitive. I'm glad I finally got around to reading it, but I'm happy to be done.
These two books put me into the Lord category at the Tournament of Reading. If I want to get any higher I'll have to read another historical fiction book.
classics medieval