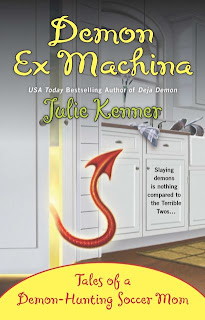 I found this series on the WTM discussion board; someone said she wrote books, and I wondered what they were, and it was this fun series, which answers the question of: what happens to Buffy the Vampire Slayer when she grows up, retires from hunting evil, and becomes a soccer mom? OK, Kate Connor is a retired Demon Hunter, but it's the principle of the thing. Kate is dragged out of her suburban retirement when demons show up in town, and this is the 5th book of her adventures, as she juggles carpooling, playdates, and ultimate evil. Fellow moms will relate.

I don't want to discuss the storyline, since it would reveal way too much about how the series goes, so suffice to say that it's both funny and hard to put down. Read the series, and start with Carpe Demon: Adventures of a Demon-Hunting Soccer Mom.

You gotta love the title! This was a really nice memoir by Dr. Caskie, a minister of the Scottish Kirk who was running the Paris branch of his church when World War II started. He had to escape Paris and ended up in Marseilles, smuggling British soldiers and agents out of the country. When that operation was shut down by a traitor, he went to Grenoble and continued his underground work for a couple of years until he was arrested and spent several months in horrible prisons. He was sentenced to death but reprieved, and spent the rest of the war in an ordinary POW prison near Paris.

His story is exciting, humorous, and full of faith. I enjoyed this one a lot and raced through it. If you like WWII memoirs, this is one to read.
52 books