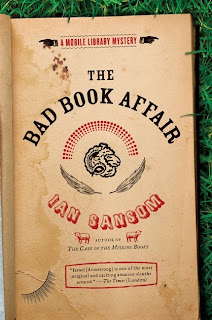 The Bad Book Affair, by Ian Sansom (A Mobile Library mystery)
I don't think the Mobile Library mysteries are all that well known, but they're fun to read, especially if you're a librarian. They center on Israel Armstrong, "Tumdrum's and possibly Ireland's only English Jewish vegetarian mobile librarian." Tumdrum is a tiny village in the middle of nowhere in Northern Ireland, and Israel, who is sort of a schlub, wants big cities and sophisticated conversation. Instead he runs the bookmobile.
These are mysteries in the same sense as the No. 1 Ladies' Detective Agency books are--there's a minor mystery, but really it's all about the characters and the life. But instead of being uplifting and generous, they're daft and funny. Israel is very like Arthur Dent, always out of place and 10 minutes behind the conversation.
The mystery part has to do with the "bad books"--the books Israel has to keep under the counter so innocent children won't be corrupted by them. A teenage girl borrows one, and the next thing we know she's disappeared and Israel is under suspicion of either corrupting her or kidnapping her. So off he trundles to investigate.
I always enjoy reading about Israel, and if you'd like to try the series you should start with The Case of the Missing Books.
52 books