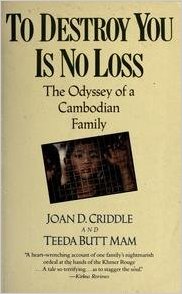 To Destroy You Is No Loss: The Odyssey of a Cambodian Family, by Teeda Butt Mam and Joan D. Criddle

I found the follow-up to this memoir, Bamboo and Butterflies, at my library, where it was being weeded because it's falling apart.   Once I figured out that it was a follow-up, I went looking for the first volume, and thus I have my #3 summer read.

Teeda Butt was 15 years old and part of a fairly well-to-do Phnom Penh family when the Khmer Rouge won its war against the Khmer Republic government (which had itself come into power through a coup only five years before).  Everyone was just happy for the war to be over; they figured that China seemed to be doing okay under Communism, so it wouldn't be too much worse than the last few governments.  The Khmer Rouge, however, was run by radicals who planned to remake society entirely.

Phnom Penh was emptied and the people told to leave for ancestral villages.  No supplies were given at all: no water, food, or anything.  Teeda's large family was determined to stay together, and they had stashed food pretty carefully, so they did make it to the village where her father had once been an official.  He was taken away for 're-education.'  The next four years would consist of utter poverty, slave labor, and constant fear, always subject to the Angka Loeu, the High Organization that issued all orders.  Angka was the wall that Pol Pot and his fellow despots hid behind; instead of a cult of personality, like so many Communist regimes have imposed, the Khmer Rouge leaders stayed anonymous, purposely giving an impression of remote mystery.

Teeda's story is spellbinding and terrible.  The whole time, I kept thinking of how the Khmer Rouge illustrated the dangers inherent in radicalism and group-think.  Here you had a group that allowed no disagreement or debate whatsoever, and certainly not any criticism.  In their self-inflicted echo chamber, they imagined a society to fit some very strange ideals, not to fit human beings.  They got away with as much as they did because they cut the whole country off from the outside and used classic tactics to keep their population off-balance, hungry, uncertain, and afraid.  In their madness, they were prepared to murder millions; in fact, they eventually planned to kill everyone who had been over the age of twelve at their victory.

The family story goes up to the invasion by Vietnam, which Cambodians saw as a liberation (albeit one not to be trusted very far) because it freed them from Angka.  Teeda's family walked to Thailand in hopes of crossing the border, which they did -- only to be transported back when the Thai refugee camps overflowed.  So they did it all again, determined to get to America.  Teeda finishes with an account of how all her family members did for the next several years, and it's a dizzying story of hard work and accomplishment.

Every time I read about Cambodia, I realize again how very much worse the Khmer Rouge was than I manage to remember.  (And I just read about Cambodia....).  The scale and nature of this murderous regime is just mind-boggling; in only four years, they managed to murder a good 25% of their own people, probably around two million, but it could be three.  Not wishing to waste bullets, they did it mostly by hand (or by starvation and lack of real medical care).  Everyone was enslaved.  And they destroyed most of the country's material cultural heritage too.  Their attitude was exemplified by the slogan that inspired the book's title: "To keep you is no benefit; to destroy you is no loss."

This is a really good memoir of a point in history that everyone ought to know about.  I'll be reading the follow-up soon, too, which is about their adjustment to American life.

20 books of summer history memoir/biography read around the world