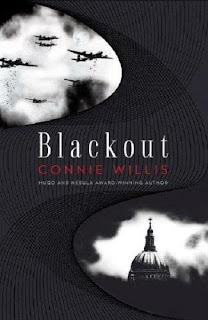 I love Connie Willis' time travel books, which posit a future where Oxford historians travel back in time to study the past. No objects can be carried into the future, and it's a relatively new science that sometimes has unexpected issues arise. So there are no commercial interests; time travel is just for historians with a penchant for discomfort and danger. Willis' previous major time-travel books are Doomsday Book (excellent, very very sad) and To Say Nothing of the Dog (a Victorian comedy with lots of in-jokes about 30's mysteries).

In Blackout, several different historians are in England during the early days of World War II. The story bounces between Dover/Dunkirk, a country manor filled with refugees, London under the Blitz, and a couple of other locations that are a little more mysterious. The historians find themselves trapped, unable to get back to their own Oxford, and the story stops right in the middle because Blackout is really just the first half of a giant novel that got divided in two. The second half, All Clear, is now available and I'm going to go pick it up from the library today! I put off reading Blackout so I wouldn't have to agonize, as I saw many people doing last year when it came out.

Willis is fascinated with the Blitz and WWII, and she really pours a lot of work into this book, making it as realistic and detailed as possible. It's a nice long novel, hard to put down and well worth reading.
52 books