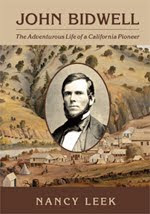 I wasn't going to write more posts until the new year, but as long as I did last week's I might as well finish off the year with the best, most exciting book of 2010, a middle-grade biography-- John Bidwell: The Adventurous Life of a California Pioneer, by Nancy Leek.

Unless you live in Chico, you probably won't have heard of Bidwell, but he was one of the first Americans to get to California by crossing over the Sierra Nevadas in 1841. From then on, he was involved in everything interesting that happened in California; he worked and traveled for John Sutter, joined the California Rebellion, nearly started the gold rush a year or so early, took the news of gold to San Francisco, served in Congress, ran for California governor, and founded the city of Chico. He even ran for President on the Prohibition ticket in 1892 (the platform was temperance and women's suffrage--he never had a chance).

This biography is 10 chapters long and full of interesting and funny stories. Would you eat a coyote's windpipe if you were hungry enough? If you were a 17-year-old bride, could you carry your baby across the mountains, with no trail to follow and no shoes to wear? If you were a wealthy girl, would you be as brave as Annie and leave your home and family to get married and live in the wilderness of California? How would you tell the President's wife that she is supposed to share? And why did the lack of a batea keep the Gold Rush from starting for a couple of years?

This is a great book for anyone studying California or pioneer history. John Bidwell is available from Lyon Books, Bidwell Mansion, the ANCHR website, or me. Because Nancy Leek is my mom, and she wrote the book. Yay Mom!
52 books