Catching up a bit... 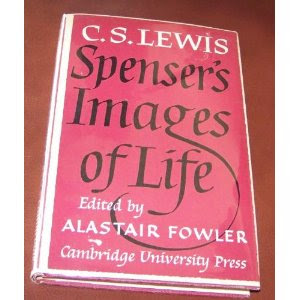 Spenser's Images of Life, by C. S. Lewis and Alastair Fowler
Near the end of his life, C. S. Lewis moved to Cambridge University. There he planned to produce a book based on his lectures about Edmund Spenser, but it was never written. He left lecture notes, which Alastair Fowler turned into this book--you can tell that it wasn't really written by Lewis, but that the ideas and certain turns of phrase were his.
I always like to read Lewis' literary criticism, and while I don't know if this happens to everyone, he always makes me want to read the works he writes about. Every time I read Lewis on The Faerie Queene, I want to read it myself--and then I look at the actual poem and wilt. It's too hard! I can barely understand what Spenser is even saying, much less what message he's trying to convey! You want me to read how many cantos of this??
Anyway, even if I can't quite read Elizabethan epic poetry, I can enjoy this book that explains a lot about what Spenser was trying to do. And it inspired me to go looking--I've always thought it would be a great help if there was a lavishly illustrated edition of The Faerie Queene, preferably done in a Howard Pyle style. And there is one! Walter Crane did it in the late Victorian era, and you can get the illustrations in a Dover art book.* And there is even an old book of "Stories from the Faerie Queene" for children, like Lamb's Tales from Shakespeare. I've ordered it; maybe that will help me, and the kids will enjoy it.

*You can also get the whole thing in a fancy edition from the Easton Press for $400, which makes me wonder who on earth would buy such a thing. Really, who?

A Preface to Paradise Lost, by C. S. Lewis

I enjoyed the Spenser book so much that I decided to finally read this book, which I've had for years but have put off reading, because like most modern people--even literature majors--I don't like Paradise Lost and don't particularly want to. Because it's really hard to read and anyway Milton was an awful man, repressing his poor daughters all the time.
As you might expect, Lewis pokes through all that, shows that Paradise Lost is a badly-maligned, if flawed, work of genius, and manages to make you actually want to read, enjoy, and understand it. Even if you're not going to tackle the epic, I'd recommend anyone to read the chapter on Satan, which deflates all the conventional wisdom on Milton's depiction of the fallen angels.
And no, I'm not going to try to read Paradise Lost just now. But I'm more willing to give it a try someday, and I am at least convinced that I would be better off if I did.
52 books