Week 30: An Alcatraz book and a Goudge title 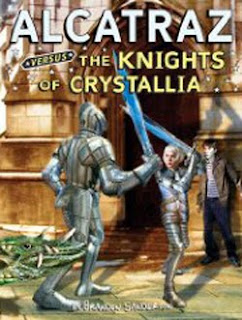 Alcatraz vs. The Knights of Crystallia, by Brandon Sanderson
I like Sanderson's writing, and this is his series for children, starring Alcatraz Smedly. The first book is Alcatraz vs. The Evil Librarians--it turns out that evil librarians run our world, denying us all truthful information. So obviously I like the premise. This series is also where Sanderson lets himself be as silly as he wants to be, which is very silly indeed. It can get a little grating at times, but mostly it's quite funny.

This third installment in the Alcatraz series is, I think, equal to the first two. For the first time, you see something of the other free countries of the world which are not under Librarian control and there's some good action.
Sanderson is one of the best and most original fantasy writers out there, so I recommend his books (here's a list!). He is always taking common tropes and playing with them--for example the most evil librarian of them all is called She Who Cannot Be Named--not because people are afraid of invoking her, but because no one can actually pronounce her real name.

Heart of the Family, by Elizabeth Goudge
This is the last book in the Eliot chronicles, and it takes place several years after Pilgrim's Inn. Much of the focus is switched to the younger generation, although David Eliot is still the main character. Each book in this trilogy has a thematic word that takes on great significance as the characters search for the quality described in that particular word. It's an interesting device that I enjoyed. (But I'm not going to tell you what the words are!)
52 books