My Family and Other Animals 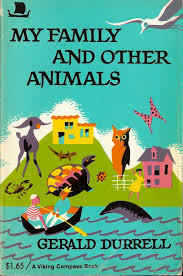 My Family and Other Animals, by Gerald Durrell

In order to finish Sarah's Back to the Classics challenge, I was supposed to come up with a book having something to do with animals.  This stumped me.  Look at my CC list--nary a critter to be found.  So I wandered around my bookshelf and found one of my all-time ever favorite books.

Gerald Durrell was a famous naturalist, and started one of the first conservation zoos in the world--Durrell Wildlife Park on Jersey Island.  He publicized and partly financed his conservation efforts by writing books about his adventures with animals, and My Family and Other Animals is probably the most famous of them.

For five years in the 1930s, the entire Durrell family lived on the Greek island of Corfu.  This consisted of Mrs. Durrell, widow; pompous Larry,* gun-obsessed Leslie, fashion-conscious Margo, and Gerry, age 10 and animal-mad from birth.   Durrell combines animal adventures with stories about his eccentric family and their even more eccentric friends, and the whole thing is just completely funny and wonderful.   You really have to read it to believe how great it is.

Gerald Durrell could wax more lyrical about animals than anyone else I've ever read.  Nowhere else will you read a loving description of a scorpion that can convince you of its beauty and excellent character traits.  Even if you're not an animal person (I am not), you should not go through life deprived of My Family and Other Animals.  That would just be terrible.  Don't do it to yourself.


*The novelist Lawrence Durrell, who I really must read someday, but it's hard to take a highbrow literary novelist seriously after seeing him so thoroughly skewered in these books.
Posted by Jean at 4:08 PM