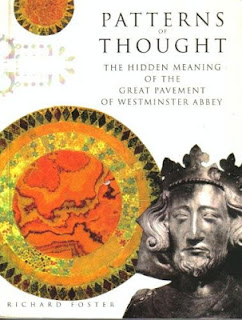 Patterns of Thought: the Hidden Meaning of the Great Pavement of Westminster Abbey, by Richard Foster

Story time!  Yesterday I mentioned that I was put into a complicated quilting mood by a quilting book.  It was a book called Bella Bella Quilts, and is all about translating Italian cosmati work into quilt form.  It is my ambition to someday make some of these quilts, but they are pretty high-level stuff.  For the moment I am daydreaming, but I'm going to do it.

Cosmati is a medieval Italian tiling technique that used complex geometric patterns set into white marble.   It's amazing stuff, and especially interesting to quilters.  This photo is taken from the explanation of cosmati at the Westminster Abbey page:

Back in the mid-thirteenth century, King Henry III commissioned a cosmati pavement for the high altar at Westminster Abbey.  He imported Italian workers, but not the white marble; instead, they used local Purbeck marble, which is a greyish limestone.  The Westminster pavement is one of the great medieval artworks of England, and I've had a thing for it ever since I first read about it.  Which is why, when I saw the Bella Bella quilts, I knew I wanted to make one someday.  Here is a photo of the floor: 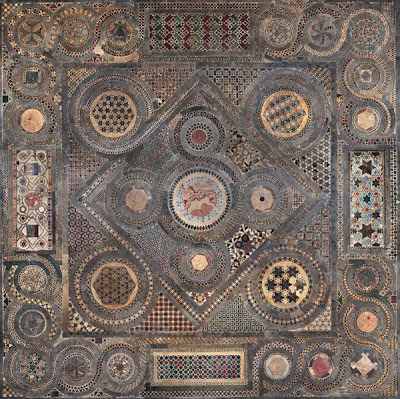 This is the floor as it looks now, after a two-year conservation and restoration project that was just completed recently.  The book I read dates from 1991, just two years after the carpet that covered the floor was taken up for a few days for the public to view.  It had been invisible for many years, and remained covered even for weddings and coronations.  Until just recently, hardly anyone got a chance to see it.

My parents brought Patterns of Thought back from a trip to England at least 10 years ago.  I've read it three times now because I think the floor is just fascinating, and since I was thinking about quilts I had to read it again.

Foster provides a detailed history of what is known about the floor--where the materials came from, all that sort of thing, and about restoration efforts in the past.  Once there was an inscription of brass letters inlaid into three of the edges, and that is extensively covered as well.  Finally, he talks about what I think is the most interesting part: the symbolic meaning of the patterns and what they most likely would have meant to the people who first saw them.  It's not just a decorative pavement; it's a picture of the universe, communicated in geometry.

It's a really neat book, and as far as I know is still the best book available on the history of the pavement.  I think it's just fascinating, so I encourage you to read up on it too.  However, it seems to be out of print and really only available easily in the UK.

Someone (but not Dan Brown) could write a whole mystery/thriller novel about secrets passed down through the ages and whatnot, centered on this pavement.  I'd read it, but I'd be pretty mad if it wasn't done really well.

When I first went looking for online resources about the pavement, I only found the general Westminster Abbey page, but just now I found an entire website dedicated to the pavement and its restoration.  So I know what I'll be looking at this evening.

Wow! That sounds so cool! I'm not a quilter, but I think I would like to read that. Since the book is hard to find in the U.S., can you share the website?

I think you should write the mystery/thriller...I would read it. ;)

Oh my word. I love that pavement and it is wonderful to meet another fellow nerd who actually knows about it. I haven't however read Patterns of Thought and I didn't even know it existed so that's a lovely discovery... I know what I'm adding to my wishlist this evening!

Emily, I linked the website in the text, but maybe it didn't show up. It's http://www.westminster-abbey.org/conservation/home and I'm really enjoying the fantastic videos! So many closeups of the work! I'm totally geeking out over here. The brass letters, for example, are much smaller than I had thought from the book's photos.

Alex! A fellow pavement lover! I suppose you must have seen it in person, you lucky thing. (I have been to the Abbey once in my life, in 1996, and it was covered at that time. I was sad, but unsurprised, as back then seeing it was apparently a once-a-year event.) I'm so happy to know that someone else has a thing for it too!

Well, sounds like you've got the basis for your great American novel.