By Jean - November 23, 2013
The legends and stories of King Arthur and his knights have been popular for over a thousand years, and during that time the stories have changed and developed into a tangle of related tales with wild offshoots all over the place.    Arthur himself may or may not have really existed, but if he did, he wouldn't have been anything like the king in the stories we know now.  Instead, Arthur has served as a figure to which we can pin our ideas about loyalty, love, and duty; the total lack of historical fact lets us embroider as we please and remake him in whatever guise we prefer.

I'd like to spend some time in 2014 reading the old Arthurian material and seeing how it developed over the years into different stories.  I need company, so I hope some of you will join me in an Arthurian reading challenge! 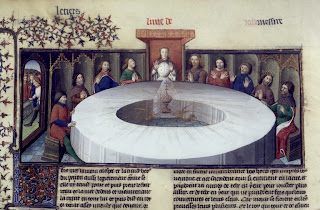 I cannot write an exhaustive list of Arthurian literature!  Pretty well anything on Wikipedia's list will do.  You will find that some works have rather technical titles to distinguish between the avalanche of near-identical titles (the alliterative Morte Arthure is different than the stanzaic Morte Arthur, and don't forget that extra E!).  Here are some great choices:

Culhwch and Olwen
The History of the Kings of Britain, by Geoffrey of Monmouth,    .
Roman de Brut, by Wace.  Mostly the same story as Geoffrey of Monmouth wrote, but now in verse!
Tristan, by Beroul
Lais of Marie de France (Lanval and Chevrefoil)
Works of Chretien de Troyes -- in English, you can usually find these collected under the title Arthurian Romances
Parzival, by Wolfram von Eschenbach
Brut, by Laȝamon.  Reworking of Geoffrey, but in English.
The Black Book of Carmarthen
Alliterative Morte Arthure
The Quest for the Holy Grail or any other book in the Lancelot-Grail/Vulgate Cycle
Sir Gawain and the Green Knight, by the Pearl poet (Tolkien did a wonderful translation of this poem)
Tales from the Mabinogion
Le Morte d'Arthur by Sir Thomas Malory (it's not too hard to read this in the original!)
The Faerie Queene, by Edmund Spenser

Idylls of the King or "The Lady of Shallott" by Tennyson
The Boy's King Arthur by Sidney Lanier (illustrations by N. C. Wyeth!)
A Connecticut Yankee in King Arthur's Court, by Mark Twain
The Story of King Arthur and His Knights, by Howard Pyle, plus three other volumes
King Arthur, by Andrew Lang (author of the Blue Fairy Book, etc.)
War in Heaven or poetry by Charles Williams
The Once and Future King, by T. H. White (or just The Sword in the Stone)
The Fall of Arthur, by J. R. R. Tolkien 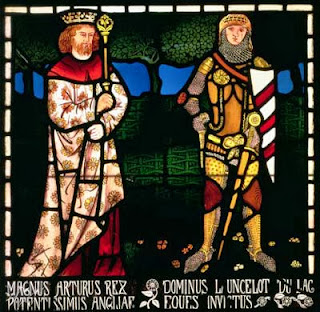