The Lost Art of Dress 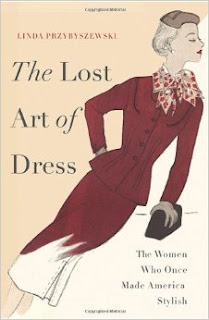 The Lost Art of Dress: the Women Who Once Made America Stylish, by Linda Przybyszewski

This is a fabulous book and will definitely be on my top ten list for 2016.  I loved reading it and did very little else for a few days.  I read a lot of bits out loud to family members who wished I wouldn't.  But it hit all of my buttons: history, fabric, sewing, woman stuff, did I mention fabric?  I even got some family history in there.

Przybyszewski writes about the women she calls "the Dress Doctors:" professional women who mostly worked as academic home economists from 1900 to 1960 and made it their mission to teach American girls and women to dress according to principles of beauty, dignity, practicality, thrift, and egalitarianism.  All you need are a few excellent outfits, suited to your life and put together according to "the art principles," and you will be free to do your work with confidence and poise.  The Dress Doctors are why Agatha Christie novels mention American girls as always looking like they've stepped out of a band-box no matter how little income they have.

(The problem I'm having with this book is that there is so much to say about it that I'm not sure how to condense it into a reasonable blog post.  I loved so much of this.  So bear with me.)

First we hear about the early 1900s, how the Dress Doctors got started and what their artistic principles were.  Women were starting to move into the professions, and often needed practical styles that hadn't quite been invented yet; meanwhile, high fashion was restrictive, expensive, and frequently ridiculous.  Realism, and beauty in real life, became the Dress Doctors' aim.

They weren't terribly worried about women's looks, or weight, or age, all factors that we now consider paramount.   Their idea was for women to dress well for their circumstances and then stop worrying about it.  Youth called for bright colors and loose clothing for activity (American girls should be athletic!), while sophisticated dress and colors were for the experienced woman over 30, and older women had another set of dress ideals.

Thrift was extremely important.  Dress Doctors were all about "much for little" -- putting together a wardrobe that was affordable and would last.  They wrote about re-making old garments into new ones, encouraged girls and women to save money by sewing, and even engaged in projects like figuring out a possible wardrobe for girls living in such poverty that they stopped going to school because they only had rags.  Nationwide classes through organizations like 4-H were then organized to reach teens and women.  What they weren't terribly good at, at all, was widening their focus beyond the white population, and Przybyszewski spends some time on that.

I was particularly interested in the thrifty parts of the book, and then Przybyszewski came up with an extra fun bit for me.  She started talking about the Woman's Institute (of Scranton, PA), which gave correspondence courses in sewing and dress.  By taking the lessons, anyone could learn to sew anything, including tailoring and children's clothing.  Their aim was to help women be independent and learn skills they could use to earn an income.  (They seem to have been partners with a more general outfit, the International Textbook Company, which gave courses in business and basic education, but I'm not sure how they were related.)

It so happens that I have a whole shelf of books from the Woman's Institute; my great-grandmother took their courses in the 20s and 30s.  She always wanted a good education, but was unable to go to college, so she took correspondence courses all the time.  She eventually did achieve a college education--she must have been one of the first little old ladies to start college coursework, because she did it in the 60s.  Apparently the college didn't quite know what to make of her, but she earned a BA in accounting and then worked as a bookkeeper.  In her 70s.

The Dress Doctors got into something of a dilemma, though.  In the early part of the 20th century, home economics was just about the only academic discipline available to an ambitious, intellectual sort of woman.  Other disciplines actively disdained women, and so the women went to home ec and widened it into a subject that contained many; students learned chemistry, mechanics, medicine, and all sorts of things.  But home economics was never well-respected, because....it was full of women.  Then the new feminists came along and vocally castigated home economics as oppressive.  Universities closed home ec departments as fast as they could.  And still today, we think of home ec as pathetic and oppressive and anti-feminist--despite the work home economists did to truly improve the lives of women and families, and which we could probably use more of today.

I enjoyed this book so much.  Now, understand that while Przybyszewski is an academic historian, this isn't really an academic history.  It's full of footnotes, yes, but it's also full of very vocal opinions!  Przybyszewski loves the Dress Doctors (and 1930s styles) and wants you to know it.  It's also written at a popular, not an academic, level, which makes it more fun.  If you're at all interested in clothing or fashion or women's history, I think it's a must-read!

Some bits I liked:


If you cannot walk more than a block in your shoes, they are not shoes; they are pretty sculptures that you happen to have attached to your feet. (p 21)

The task the home economists faced--defending both women who wanted to work only in the home and women who wanted to work outside it--was impossible, because women on each side felt insulted by the choices made by women on the other side.  "If we could get women to accept the fact that some women can and want to have dual roles," lamented one committee member, "just as other women prefer only the domestic role."  We are still getting women to accept that fact. (p 194)

[On wearing pants] It helped that, one morning in January 1968, the fashion stars and the weather aligned.  The temperature...stood at a mere 3 degrees as children headed back to school...More than five hundred parents sent their daughters out in pants, only to have school principals send them right back home again for not being properly dressed...the superintendent of schools issued a letter saying that principals did not have the power to ban girls who wore pants.  A school dress code could not require frostbite.  (p 201)

...women welcomed pants in the late 1960s in part because they were desperate for a fashionable alternative to the miniskirt.  An executive at the Chicago Tribune noticed in 1969 that the office women were "much more at ease" when wearing pants than they were in miniskirts.  Who could blame them?  Miniskirts made crossing one's knees "an ordeal."  Pants solved the problem. (p 208)

This sounds fascinating! I was just wishing that bloggers wrote more about nonfiction, and then here you are, reviewing a super interesting women's history book. You have condensed it all into a VERY reasonable blog post.

On a very faintly related note, have you read McCall's Pattern Behavior? It is a Tumblr that pokes gentle fun at the covers of clothing patterns, and it makes me laugh very very much.

Oh! I will go look for it. There was one I used to read that was great, but it died and I haven't got one now, so yay!

I like non-fiction. :) Right now I'm reading a really grim one about Cambodia.