What is to be Done? 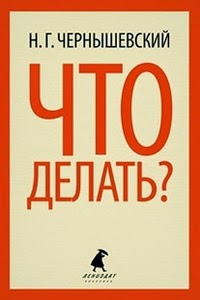 What is to be Done?  by Nikolai Gavrilovich Chernyshevsky

I read this for Tom's April readalong, and I was quite excited about it because What is to be Done? was an important part of a literary debate in 19th century Russia about what Russian society should be.  Turgenev first asked the question in Fathers and Sons, and here Chernyshevsky tries to answer it.  He doesn't claim great literary talent; in fact, he says right out that he hasn't got much.  He wrote a novel--while in prison--because that was the way Russians got around the censors to write about revolutionary ideas.  Such ideas are very thinly veiled in this novel, which likens Russia to a bad wheatfield that is sorely in need of drainage and general reform.

There is a plot, though.  Vera is a young woman who is desperate to escape her family, especially her mother, who is a crook and a cheat, and who wants to arrange an advantageous marriage for her daughter.  Vera is rescued by Lopukhov, a virtuous medical student and tutor who marries her (this being the only means of escape open to a young woman).  They have an odd, formalized but friendly marriage, and Vera starts a sewing collective.  Well, she starts a sewing business which is run along profit-sharing lines, and her seamstresses share expenses by moving in together--there is a lot about how to take advantage of economies of scale, but (disappointingly) nothing whatsoever about sewing.  Chernyshevsky is all about the message; there is hardly any detail or setting or anything to bring the world of the novel to life.

Vera's business is a good success, but she falls in love with Lopukhov's best friend Kirsanov.  Lopukhov sets her free by committing suicide, and Vera is heart-broken until this sort of Revolutionary Superman guy, Rakhmetov, visits and gives her a letter from Lopukhov explaining that really he has run off to Europe so she can be free.  Vera marries Kirsanov and they live happily ever after for about 150 more pages.

It's a really weird story in several ways.  Sometimes I think it was written by an alien or something.  The point is to set Vera free, to make her an equal member of society.  Evidently Chernyshevsky really wanted to set his own wife free and have her be equal too--which meant striving and earning her own way in the world, since everyone can only be equal when they earn their own living
--but Olga didn't want to be free.  She wanted to be a bourgeois housewife like everyone else.  So Chernyshevsky wrote himself a story where everything would be like he wanted, and he spends a lot of time explaining just how to live so as to be happy and have plenty and everything just wonderful.

I honestly have no idea why Russian revolutionaries loved this book so much.  Lenin thought it was fantastic and life-changing.  Why?  Vera starts a business, and she is treated as an equal to her husband--not the usual thing to be sure, but drawing a line from Vera's ideal of everyone doing as they please and the Bolshevik Revolution is something of a difficult exercise for me.  And there's this guy who lives like an ascetic, among the people, working to bring the revolution forward by...giving advice.  That's pretty much it.  Nobody acts like a Bolshevik that I can see (this novel is pre-Marx, for one thing).

It's a historical curiosity far more than it is great literature.  The first two-thirds or so are quite readable, but the last third loses shape and becomes more difficult to stick with as Chernyshevsky doesn't seem to know where to point his characters next.  Vera is free; what else is there to do?  If you want to read it, be sure to get the 1989 translation by Katz; you can get the first translation free digitally, but the Katz is a lot better.  You'll need ILL.

The next chapter in this literary debate is Dostoevsky's Notes From the Underground.  I'll be getting that pretty soon, but since May is "WWI month" at the Classics Club I think I'll tackle August 1914 first.
Posted by Jean at 6:27 PM

This is great! The best readalong ever. You and Bailey are doing all of the hard work. The minor problem is that I now have nothing to add. I will start writing up my nothing today.

I can answer a couple of questions. Rakhmetov is the Bolshevik, the model for Lenin and future Bolsehviks. It's the "biography" chapter that really did the trick on people, not the "advice" chapter. It's that bed of nails.

The line from Vera's ideal to the (not yet) Bolshevik revolution is hard to draw because it is deliberately interrupted by part 7 of Vera's 4th dream. After that, though, note that the Czar is gone and the state has withered away and people can "hunt in the morning, fish in the afternoon, rear cattle in the evening, criticise after dinner, just as I have a mind."

A skeptical outsider coming across this comment may well think "7th part of the 4th dream - you people are nuts!"

Thanks for joining in!

We are nuts. That is not even a question. My Russian SIL found out I read this and wondered what I was thinking.

That ideal world, though, where everyone can hunt and fish and all---is that even what the Bolsheviks were aiming for? Weren't they much more about factories and industry? Yeah, the Czar and the state are gone (all that bureaucracy!), it's just that all that freedom and leisure seem so...unCommunist!

My Russian SIL, as in, the woman with a master's in 19th century Russian literature...

Ha ha ha! Did you tell her it's not that bad? Well, in places it is that bad. But it's worth reading just for the insights into Dostoevsky.

That quote about hunting and so on is from Karl Marx, and what he says is the Truth, so that kind of ideal world is a Bolshevik goal in theory. The Communist regime is a transitional position between capitalism and something like what Chernyshevsky describes (which he obviously did not need Marx to dream up).

To get to the end of history, only a few additional minor conditions need to be met. First, worldwide Communist revolution (an innovation of Lenin's); second, labor productivity so high that everyone's material needs are easily satisfied without labor specialization. So the industrial armies and collectivized farms are part of this transitional step.

Marx is vague on all this, and it is now clear to me that many Russian Marxists of the more theoretical variety although employing Marxist doctrine had Chernyshevsky's transformed desert - Crystal Palace fantasy in mind as their idea of "perfect communism."

Obviously all of this is a long, long way from any Marxist state that has ever existed or will ever exist, where all of these brutal transitional steps turn out to be permanent conditions.

Oh, she's read it--she commented that maybe she should read it again--but I think from her POV it's a pretty strange thing to want to read, this book from the history of a country I have nothing to do with.

Yeah, I guess they did have this sort of beautiful blossoming desert fantasy in mind--what a mirage that turned out to be. Reality contains many more denunciations and gulags.

I forgot to say that to me, Chernyshevsky doesn't seem to know much about everyday life. He knows nothing about sewing obviously, or whether a sewing business would actually result in prosperity for large numbers of people. He also knows nothing about running a home (who does the cleaning? oh yes, they have a cook to produce the food--does he clean too?) or child-rearing--the baby is cute and snuggly but takes up no time at all. She does have a nurse, though.

So the socialist ideal still involves having servants; since housework was a full-time job and then some in the mid-19th century, Chernyshevsky probably couldn't imagine *not* having them. But still, it's like he knows these things have to happen, but only sort of theoretically--he doesn't know how much time or effort they take, or how to do them, or anything like that. Surely all that stuff can be waved away, and Vera can live a leisured, comfortable life while also running a business, training as a doctor, and raising a child! No problem.

That's a good question, about how the utopia is supposed to actually function. Moscow and Petersburg remain industrial centers, because all those glass and iron palaces have to be manufactured somewhere, as does all the gawcy aluminum furniture, but he never addresses that people will have to live in Moscow and Petersburg and work in those factories while the rest of the happy utopians are off working the paradisical farms. And yeah, Vera gets her medical degree in her spare time, but she's a superhero; they're all superheros no matter what Chernyshevsky claims to the contrary.