There Once Lived a Mother Who Loved Her Children..... 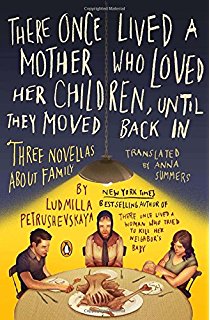 There Once Lived a Mother Who Loved Her Children, Until They Moved Back In, by Ludmilla
Petrushevskaya

Ludmilla Petrushevskaya's writing was suppressed for years under the Soviet Union, although her stories are entirely domestic and not at all political.  These three novellas are about family; other collections are about love or other situations.  They're stories of desperation and misery, of the extremities of domestic hell, but they are also about how utterly ordinary such lives are.  These are tired women trying to raise children amidst violent men and sick relatives, with no money whatsoever.

The first story, "The Time is Night," is much the longest.  Anna is trying to raise her grandson on the few rubles she gets from poetry readings, while her son, freshly out of prison, terrorizes her and her daughter has another baby on the way.  Anna loves her children desperately but can only either criticize or spoil them.

In "Chocolates With Liqueur," Leila's terrifying husband leaves her, except when he doesn't.  Mostly he wants her and the children to disappear so he can sell the apartment.

"Among Friends" chronicles a group of friends over the years, as pairings break up and re-form.  The narrator, dying of an illness, orchestrates events so that her son will be cared for, even at the expense of her own reputation.

These are not at all easy or pleasant stories to read.  They're disturbing in every way, and while I'm attracted to other Petrushevskaya titles, I'm not at all sure that I want to read them.  A review blurb on the back (from Elle) says it better than I can; it comments, "nothing about it screams 'political' or 'dissident' or anything else.  It just screams."
Posted by Jean at 8:00 AM

Russian writers are so endlessly depressing!