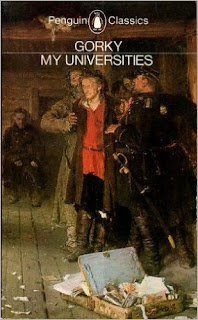 My Universities, by Maxim Gorky

I've finished Gorky's trilogy of memoirs!  (Earlier posts: My Childhood and My Apprenticeship)  And indeed they are bitter, just like his name.  Gorky is usually miserable, and I was pretty surprised when he was happy for a while, but that was soon remedied.

This volume covers four years of late adolescence.  Young Gorky reads as much as he can, but he has never been to school and has nothing resembling a real education.  When he meets a student who invites him to come to Kazan and try to get into the university there.  Gorky eagerly heads off, but is only disappointed; he's not qualified.  He continues to read as much as he can--now with a little more system--and finds various jobs.

He's now starting to get into political issues, and works at a bakery that is a secret meeting place for revolutionaries.  Much of Gorky's "universities" are his talks and arguments with the people he meets.  However, life continues so unrelentingly grim that he eventually loses heart and attempts suicide.

Things improve from there, after recovery.  Gorky heads out to a village with some friends who are starting a sort of cooperative fruit-growing enterprise and store.  Their prices are lower, but the local peasants are hostile and suspicious; this eventually culminates in the biggest disaster of the book and Gorky's near-death.  Afterwards he finds work on the Caspian Sea.

I expected more about revolutionary philosophy than I found in this book.  What I did find was a real hostility to "Tolstoyans" and their belief in the simple wisdom and beneficence of the Russian worker or peasant.  "For them the people were the living embodiment of wisdom, spiritual beauty and kindness...But I had never known any people who were really like this."  All his experience, after all, has been of cruelty and violence.   He goes on to call the workers miserable specimens and finds admirable virtue in the humanist, idealist students, rather than in the poor he has always lived among.  All this romanticism about the simple peasant just drives Gorky crazy!
Posted by Jean at 8:30 AM

The title is ironic! I had not known that.

I haven't read many Russian books myself, but this could be interesting to try. Thanks for sharing!