The morning after the fire, we were quite worried that we would not yet be allowed back into our hotel.  We couldn't exactly go touristing in our pajamas.  So I went on a scouting trip--Mom lent me her jacket and I borrowed some shoes--and happily, a policeman let me through the cordon so I could get into the hotel.  It wasn't 100% functional yet, but we could take showers and get to our stuff, and that was what mattered to us!  So I called everybody and they came over.  Firefighters had torn a hole through the ceiling tiles so they could check for fire under the roof, but otherwise all was serene.  We hit the road only 30 minutes after we had planned!


Monday was our day to go to Hampton Court Palace, and we already had reservations there.  It's some way out of central London, not too far from Heathrow in fact, so you take the Tube to the end of the line and then catch a bus.  To my 13yo's disappointment, it was not a double-decker, but it was at least a proper London red, and it was a loooong ride, enlivened only by some adorable little girls our with their mothers (and named adorable typical British things like Ivy and Bryony).  They were going to Hampton Court too; in fact the place was jam-packed with families out for a nice day, letting their kids run around in the park, which was mostly free.

We, however, went into the actual palace, which is massive, bricky, and very fancy indeed.  Cardinal Wolsey originally bought the place and fancied it up, but pretty soon Henry VIII got mad at him and decided that, come to think of it, he could use a nice palace on the river himself.  I presume Henry was the one who decided to put medallions featuring Roman emperors on the walls--labeled "Hadrian Imp" and so on, so show that they were his fellow rulers. 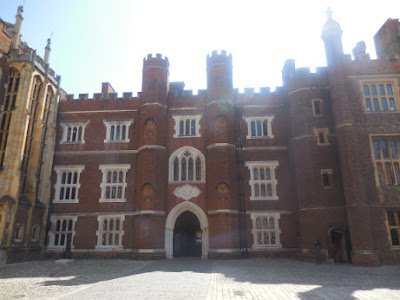 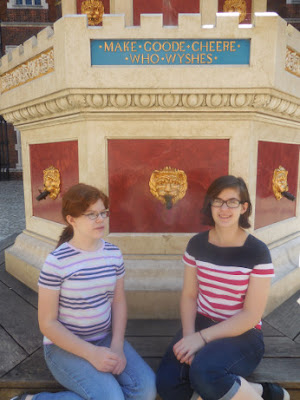 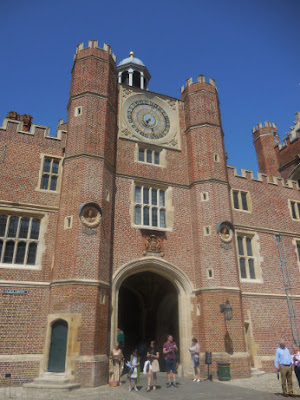 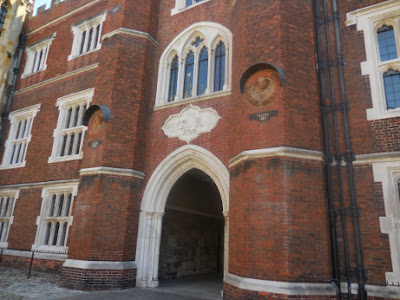 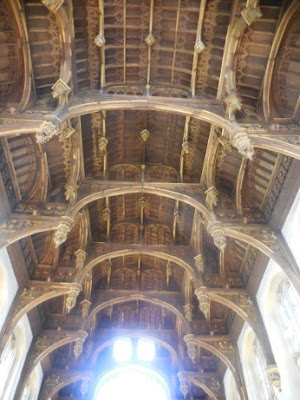 The inside rooms are very ornate indeed, but they kind of go in stages and the place really talks up the various wives.  Katherine of Aragon doesn't get much.  The dining hall has a lot of stained glass (modern reproductions) and often featured Anne Boleyn's insignia.  Henry didn't really bother to take it all out--he didn't go in that often, and the docent theorized that he was short-sighted by then anyway, and it was all very high up by the ceiling.  Then there's a room specially built for Jane Seymour, very light and fancy with lots of tapestries.

There are also some official rooms for doing royal business before you get to the chapel and Katherine Parr's rooms, so you can see right where they got married and where the royals would watch church services.  Anne of Cleves and Katherine Howard get less space.


After that, you enter wings built on during the Georgian era, which is much less  interesting.  There's an art gallery too, and a neat little hall that just has portraits of Stuart-era beauties, all painted to look exactly alike in the latest fashion.  We didn't spend long there and moved on to the courtyards, where you can see the newly-discovered chocolate kitchens and a "Young Henry VIII" exhibit that exists to remind us that he wasn't always a bloated megalomaniac; there were quite twenty years when he was young, dashing, and happily married to Katherine, who made a good partner in politics.  It was in those rooms that I finally discovered what linenfold panelling looks like--not much like I had imagined.

There is also a massive park, and the famous hedge maze.  That maze does not look very big at all on Google Maps, but it is quite large enough to get lost in.  We got to the center OK--often overtaken by overexcited zippy children and their very frazzled mothers, who wondered aloud just what they were thinking to take four children into a maze--but getting out again was another story.  (You can actually get out right from the center, but where's the fun in that?  we thought.  Hah.)  We made a lot of jokes about Three Men in a Boat, and eventually got out of there. 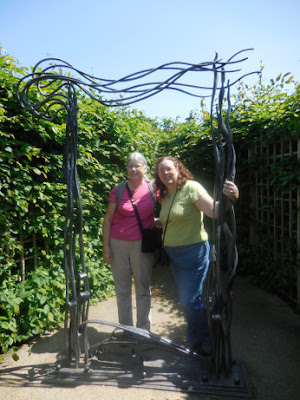 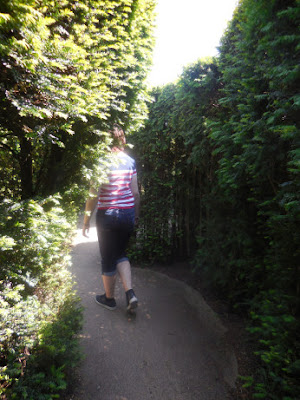 There is also a very nice rose garden, and a family-friendly cafe with a nice lawn where we got some sandwiches.  We toured the kitchens, which actually did have a fire going and some roasts roasting, and visited the shop on the way out.  There are in fact several shops, but we only wanted one, and mostly for one purpose--my good friend had asked me to get her a six-wives themed tea towel if at all possible.  She lived in the UK for a while as a girl, and had one, but it had disappeared over the years, and the wish of her heart was to have another one. 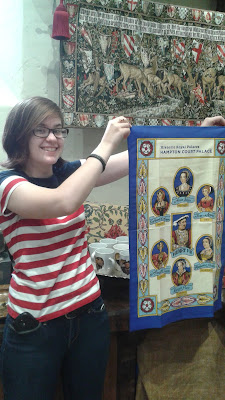 We caught the bus back, and rode it a very long way to the neighborhood of Strawberry Hill House, which I was really excited about.  The girls, especially my younger one, were really dragging by this time--it was pretty hot and we hadn't slept much--and I promised we would get ice cream afterwards; I figured we would all need it badly.

Strawberry Hill House is a fantastic place!  It's a sort of miniature Gothic castle, built by Horace Walpole, author of The Castle of Otranto--which sparked the Gothic literature craze.  (See my post here.)  Walpole wanted to build himself a little castle with an atmosphere of antique gloom that was also kind of cozy.  He liked Gothic churches, and monasteries, and castles, and combined all sorts of bits and pieces that would never have actually gone together, but who cares?  He was having fun, collecting stained glass and copying ceilings. 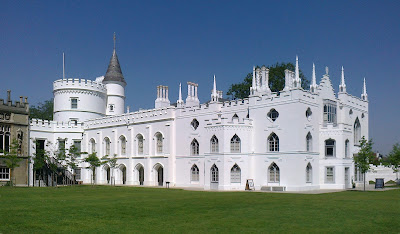 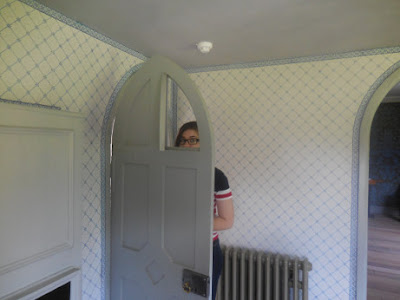 Eventually Walpole collected so much art, furniture, and glass that he filled up his whole house to the brim.  People would come and visit to see the house, and he loved showing it off.  Sadly, a couple of generations later, a great-nephew sold all the stuff off, and now it is scattered all over the place, but the dedicated people who run Strawberry Hill--mostly local volunteers--have tracked down some of it.  They are also restoring the house, and have had the original flocked wallpaper reproduced and all sorts of neat things.  So if you visit, it's kind of a work in progress and really fun to see their latest accomplishment.  When we were there, the sewing ladies were in the middle of working on replica bed curtains for the bed.  They work in a room that was turned into a Turkish smoking room in the 1800s, with a fancy embroidered ceiling!

We know just what was in the house, because Walpole was a fanatic cataloguer and published a list describing all his stuff, right down to the teacups.  In fact, when you visit, you get a great little booklet that guides you through the house and quotes bits of his descriptions of the rooms.

The further you go into the house, the less gloomy-Gothic it gets.  Instead, it gets fancier and fancier, with bright colors, ornate fan tracery on the ceilings, ingenious cabinets for holding treasures, and sliding shutters to keep the stained glass safe.  Eventually I realized what this was all reminding me of--Hearst Castle.  Walpole was just the same kind of magpie collector!  One docent pointed out a fireplace with three different non-matching motifs and said he reminded her of a kid with Legos, unable to decide which style to build in and so just choosing all of them at once.

Of course, my favorite room was the library.  It's still in very good shape, because the special bookcases were not sold off (the books were, and have been replaced with antique-books-by-the-yard and even cardboard images of rows of books to fill the shelves!).  We spent a lot of time admiring the library and talking with the docent there. 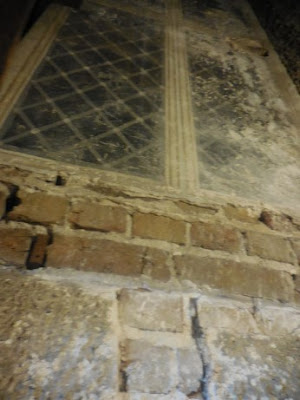 The brick wall pictured above was something pretty interesting; while the house was still being built, Walpole would paint windows on the wall facing out, so that it would look nice.  Really, another room was being built on this side, which then covered that wall.  You can see this by opening a cupboard door and craning your neck to look up between the walls. 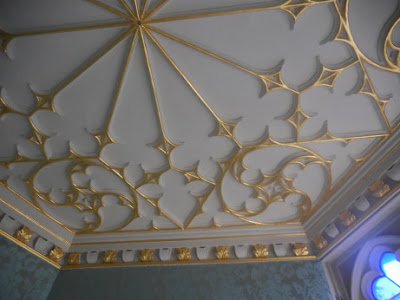 The garden outside is also nice.  There's a special grove of lime trees (I have always wondered what a lime tree looks like and now I know, though I still don't know why it's called that when it doesn't grow limes) and a shell bench. 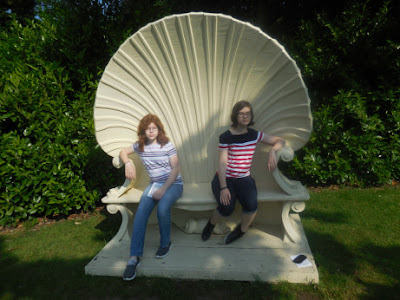 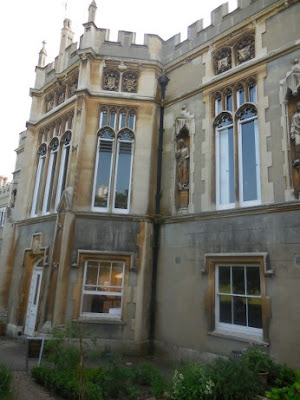 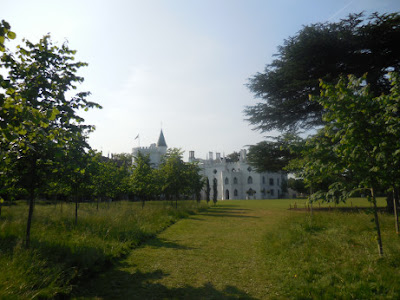 We all needed an ice cream by this point, so we walked over to a little convenience store nearby before heading to the bus stop.  The ride back to the Tube station was warm and drowsy, until we got off and my mom realized that she'd dropped her Oyster card* on the bus.  The bus was only about a block away, and sitting in heavy traffic, so I put down the backpack and ran as fast as I could.  I chased it for two blocks, but I did catch it, and the bus driver handed me the card through his window while I stood in the middle of the street.  Victory!

This was our last night in London, so we got all packed up and ready to go.

*An Oyster card is an all-purpose transportation card for the London area; you just swipe it.  We were forever putting more money on our Oyster cards!  There's a ‎£5 deposit on the thing, which you get back if you turn it in.  By the time we got to Heathrow at the end, we really needed those deposits back; we used that last £20 to buy lunch with!

Such amazing photos. I almost feel like I'm there!

I like Walpole's vision of gloomy castle, but a bit cozy, too. Sounds good to me!

Hampton Court is on my list for my next visit to London! Now I am adding Strawberry House.

Do go to Strawberry House if you can! It's a wonderful spot.