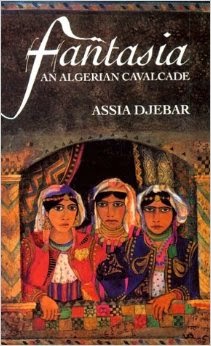 Fantasia: An Algerian Cavalcade, by Assia Djebar  (from the French L'amour, la fantasia)

In 1830, the French invaded Algeria, turning it into a colony.  Algerians have thus had a tricky dual heritage of Arabic culture and imposed French government and language, and Assia Djebar intertwines pieces of history with stories of the lives of women living within it.  This is a complex book that would keep a college literature class busy for weeks, so I can hardly do it justice here, but here are some themes:

A 'fantasia,' to Arabs, is indeed what I might call a cavalcade: a procession of riders on horseback, showing off their skills at a gallop, and incidentally firing rifles and yelling.  In the Romance languages, it means a free-form musical composition that wanders around.  Both of these meanings are put into use, and sections of the book are named after sections of a musical composition as Djebar demonstrates her skills as a storyteller.

Language, and cultural barriers to language, are extremely important to Djebar.  Even as she mourns the subjugation of her hereditary Arabic and fights to reclaim it, she resentfully loves the beauties of the subjugating French tongue that she studied in and its promise of liberation from the veil and seclusion:


For my part, even where I am composing the most commonplace of sentences, my writing is immediately caught in the snare of the old war between two peoples.  So I swing like a pendulum from images of war (war of conquest or of liberation, but always in the past) to the expression of a contradictory, ambiguous love. (p. 216)

Most particularly, she is concerned with the stories and conditions of women's lives, especially in regards to their languages or inability to communicate in words.  And all of it ties up with love, physical love, and marriage (thus the French title):

When I am growing up--shortly before my native land throws off the colonial yoke--while the man still has the right to four legitimate wives, we girls, big and little, have at our command four languages to express desire before all that is left for us is sights and moans.  French for secret missives; Arabic for our stifled aspirations toward God-the-Father, the God of the religions of the Book; Lybico-Berber which takes us back to the pagan idols--mother-gods--of pre-Islamic Mecca.  The fourth language, for all females, young or old, cloistered or half-emancipated, remains that of the body: the body which male neighbours' and cousins' eyes require to be deaf and blind, since they cannot completely incarcerate it; the body which, in trances, dances or vociferations, in fits of hope or despair, rebels, and unable to read or write, seeks some unknown shore as destination for its message of love. (p. 180)

That kind of sums it up, really.  The book consists of chapters that wander through history and different lives.  Sometimes we see a battle or a terrible slaughter; other times it's a personal story of a girl's youth.  Women living out in the mountains with soldiers fighting the French occupation, running houses that serve as safe waystations, growing up in the 1950s or going to a French school, living secluded behind walls or in Paris before a wedding...all sorts of Algerian lives in different times, nearly always in the first person.  Some few may be Djebar's own stories, but it's hard to know.  It's a fascinating book that would repay close study.

Fantasia is supposed to be the first of a quartet; the second is A Sister to Scheherazade, which I would also very much like to read.  I get the impression that all four books are rather different.

This sounds so interesting! However my library only has it in French, and judging by the one book of hers that I've read (Women of Algiers in Their Apartments), my French is definitely not up to the task. I'll keep my eye out in case it turns up used somewhere. :)

I got it through InterLibrary Loan, from a college library. I've never seen it before and it was printed in the 90s, so don't bet on it, but you never know!

Indeed, I should think you would have to be very fluent to grasp this in the original. It is not an easy read by any means, technically speaking.

Wow, I like how language is such a central tenet of this book. I think language has been used so often as a force of domination, it's interesting to see how conflicted someone could be, seeing the new language as one of liberation.

Yes, that is exactly it, Aarti. Thanks for stopping by!