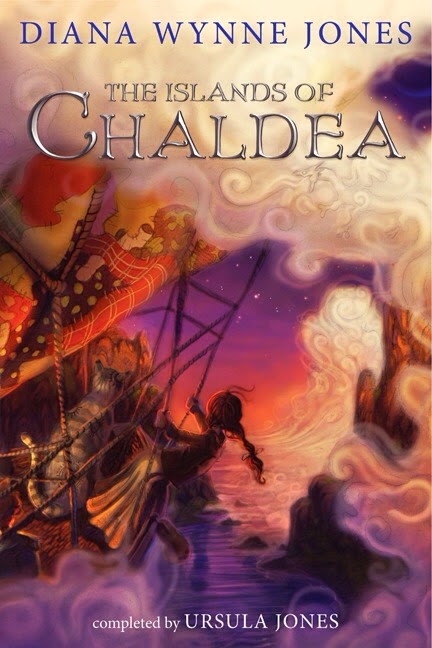 The Islands of Chaldea, by Diana Wynne Jones

This time, it's really true; I've read my last first DWJ book.  I feel very fortunate to have gotten so many!  The manuscript for this final novel was found in DWJ's papers after her death.  I think she'd written most of it and then had a health crisis, after which she didn't go back to the story.  Her younger sister, Ursula, decided to try to look for the clues of how it would go, and finish it.  She did a fantastic job; from what I hear, no one has been able to pinpoint just where the break is.  I did notice at the end that it wasn't quite DWJ, but it was dang close and only a couple of things.  This is impressive.

Aileen is supposed to be a wise woman when she grows up, but so far she feels like a failure at it.  Her Aunt Beck is the Wise Woman of their island of Skarr, and both of them set off on a journey to fulfill a prophecy that, in theory, will break the magic barrier that cuts off Logra from the other three islands of Chaldea and restore lost family members to their homes.  They head out to collect people from all three islands, but somebody is sabotaging the trip from the beginning, and Aileen feels useless, and it all gets pretty wild.

I enjoyed the twist on the British Isles that DWJ used here.  It's a stand-alone story, not visibly connected to, say, the Magid multiverse (though it could be), but DWJ liked playing around with Great Britain in several of her books.  This time, we have four islands that are somewhat (but not entirely) as if Scotland, Ireland, Wales, and England were each separate.

Of course I'll have to read it several times to catch everything about it.  This is just a first reading.  It was so nice to have it!
Posted by Jean at 7:30 AM

Oh, I KNOW. I put off Earwig and the Witch for months. I think DWJ March was what got me to read this so soon; I've been looking forward to it and thinking I've got to read it. Which I don't, but it was nice to. :)

Le sigh. The last first. I'm glad that I still have a handful left of firsts. The day I finish them all I will probably cry.
I couldn't find the seams in this one but the ending was certainly uncharacteristically tidy. Still, it was a sweet ending to an amazing career. Is it too much to hope that there's another partial manuscript sitting around?