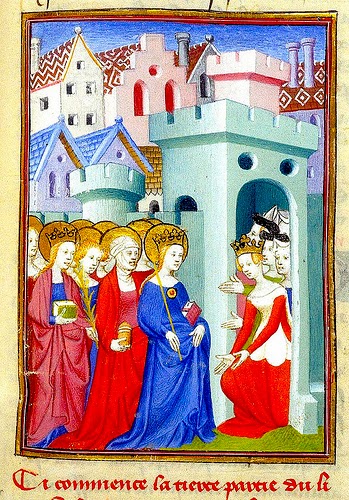 This month's Classics Club meme is:


“Dead white guys” are all too often the focus when it comes to discussions of the Western Canon. We’d love to see members highlight classic works or authors that are overlooked in the canon that deserve recognition. Pick one/or more and tell us how their work resonates for our century and/or for you. As always, you determine what is a “classic” in your point of view, including works from 2000+, and works from anywhere in the world. // Or, if you have trouble thinking of an author/work to highlight, you could simply discuss the topic itself: What is “The Western Canon” — have you thought about who/what determines which works are recognized from human history?

Ah, the canon.  Good old canon.  Having been a literature major at Berkeley in the 1990s, I got more than my fill of discussion about what the canon is, who has gotten to decide what's in it, the fact that there is no One True List, and that our ideas about the canon change all the time.  I come over all nostalgic whenever the word is mentioned. :)

I do have what I consider to be an ideal title to highlight, though, and it's even been a couple of years since I talked about it.  In 2012 I was lucky enough to discover Christine de Pizan's Book of the City of Ladies.  Though I was no expert, I had the opportunity to host a discussion on it at the Year of Feminist Classics blog.  Here are a bunch of posts:

I find Christine's and her book fascinating partly because she is a perfect example of someone who fell out of the canon for no other reason than that she was a woman writer.  Even the most casual student of medieval literature has heard of The Romance of the Rose (though actually reading it is another story), and it engendered a long literary discussion, in which Christine played a major part.  The Book of the City of Ladies is both a rebuttal to the Romance and a defense of women generally, and it's fantastic.  It's a beautiful allegory and argument in the medieval style.  In fact it's just about ideal for what it is: art, literature, and logic all in one, with plenty of great stories to illustrate points.

This is a book that ought to have been in the Western canon all along, but because Christine was a woman who said a lot of things that men of the day disagreed with, she was virtually forgotten for hundreds of years, known only to the most dedicated scholars of medieval literature.  She was only translated into English in the mid-twentieth century, which seems unbelievable to me.  City of Ladies is at least as well-written and pivotal as many a medieval text that has come down to us as required reading, but even today it isn't very well-known.

Ah, yes. This one was on my immediate reading list when life began to fall apart two years ago. I am still determined to read it as soon as I have a chance. And I love your reminiscences about "the Canon." The term does have roughly the same impact as "the One True Cross" or "the Holy Grail" once had on medieval Europeans, doesn't it?

I got an English degree at a big state school not nearly as prestigious, or good, as Berkeley, and the word "canon" was never mentioned. No theory of any kind was mentioned, although I now know that some was employed by the professors. We just read and wrote, read and wrote.

I have read this Christine de Pizan book myself, and certainly agree with your assessment, but it sure needs a lot of context to make sense. Perhaps that is true of all medieval literature.

JNC, you really will love it when you get to read it. :)

Tom, more reading and writing might have been better than the enormous amounts of theory we had to swallow--I think as comp. lit. majors we actually got more than the English people did, but certainly there was theory in English too. And the canon, with emphasis on its illusory quality, was a constant.

I do agree that you need a lot of context to make sense of medieval literature, and probably especially so with Christine. She was writing in protest against societal habits that are so foreign to us now that they have to be carefully explained. Her insistence on women's chastity sounds Puritanical until you realize that women were commonly considered to be so wanton that they would never say no to anybody--and thus rape was perfectly OK.

This one is new to me, I am immediately intrigued. How many excellent books have been obscured by the canon one wonders.
Love the blog design, great minds think alike perhaps, very much enjoy reading back through your posts. Roadside Picnic particularly caught my eye, my knowledge of Russian sci-fi is limited to Stanislaw Lem, so another title to add to the list of books to seek out.

I need to read Lem--I haven't ever seen anything by him. Thanks for stopping by!