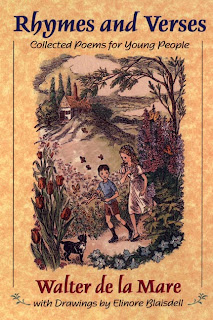 Walter de la Mare (1873 – 1956), first of all, hated being named Walter.  Everyone called him Jack.  (Maybe that was the default name for Brits saddled with overly posh names?)  Also, his last name always looks to me like it should be pronounced Mar, I don't know why, but it's not--it's Mare with a long A.

Anyway, he was one of the very influential poetic types for children right around the turn of the century and into the 1920s.  E. Nesbit was writing stories about really ordinary children, but de la Mare was more of a dreamy type, it seems to me.  He produced collections of folktales and poetry, and wrote plenty of stories and poetry of his own too.  In our house we have several collections, one of animal tales, one of his own stories called A Penny a Day, and a couple of poetry he wrote--Rhymes and Verses was released in an inexpensive hardback a few years back, so we have that. 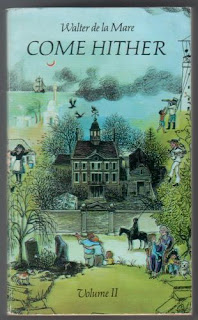 I think the 1923 book called Come Hither is the best known.  It's a collection of de la Mare's favorites, arranged thematically, and features material from all over the place--medieval, Georgian, ballads, you name it.  One interesting thing about the collection is the footnotes, which take up nearly a third of the book, and contain not only odd details, but entire stories and poems too, and bits of old spells, folklore, and so on.  I had to keep two bookmarks in it.  The other thing about the book is the framing device--the poetry is all contained in a rather spooky story that turns it all into a book of spells or wisdom.  (My copy is an old prize copy stamped with the crest of Colet Court, the prep school for St. Paul's, where de la Mare went, which I guess explains why Colet Court would give it as a prize.  But probably half the schools in England were giving Come Hither as a prize back then.)  The book was something of a hit and was released in several editions.

I did not know before today that de la Mare also wrote quite a few ghost stories!  I'm going to have to track some down and read them.

You can find a complete bibliography along with a good biographical sketch at The Poetry Foundation, so I encourage you to take a look at that.  It's quite likely that if you were given much poetry when you were young, you will remember some of his poems as ones you have read.

Is there anybody there?' said the Traveller,
Knocking on the moonlit door;
And his horse in the silence champ'd the grasses
Of the forest's ferny floor:
And a bird flew up out of the turret,
Above the Traveller's head:
And he smote upon the door again a second time;
'Is there anybody there?' he said.
But no one descended to the Traveller;
No head from the leaf-fringed sill
Lean'd over and look'd into his grey eyes,
Where he stood perplex'd and still.
But only a host of phantom listeners
That dwelt in the lone house then
Stood listening in the quiet of the moonlight
To that voice from the world of men:
Stood thronging the faint moonbeams on the dark stair,
That goes down to the empty hall,
Hearkening in an air stirr'd and shaken
By the lonely Traveller's call.
And he felt in his heart their strangeness,
Their stillness answering his cry,
While his horse moved, cropping the dark turf,
'Neath the starr'd and leafy sky;
For he suddenly smote on the door, even
Louder, and lifted his head:--
'Tell them I came, and no one answer'd,
That I kept my word,' he said.
Never the least stir made the listeners,
Though every word he spake
Fell echoing through the shadowiness of the still house
From the one man left awake:
Ay, they heard his foot upon the stirrup,
And the sound of iron on stone,
And how the silence surged softly backward,
When the plunging hoofs were gone.

I'm not surprised I don't know de la Mare--I've never really been into poetry. The collection Come Hither sounds quite interesting, though. I love footnotes! :)

Well then this is the poetry collection for you! I too am not much on poetry, but it's a fascinating book.