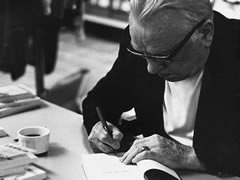 Meindert DeJong (1906 - 1991) was born in the Netherlands (in Friesland).  (BTW you pronounce it DeYoung, which I didn't know until just now.)  He emigrated with his family to the US when he was about 8.  His family was poor, and he was often lonely, as the other children at school bullied him.  Despite his family's circumstances, he earned a college degree from Calvin College in Michigan.  The Great Depression made it difficult for him to get steady work, though, and he changed jobs often.  The New Netherland Institute's biographical sketch says:


The term “variety of jobs” may not be sufficient or descriptive. De Jong worked as a college professor, probably as an adjunct professor, as a grave digger, as a mason, as a tin smith, as a sexton in a church, and as a bricklayer. 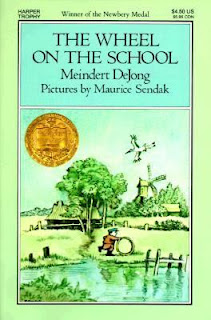 In 1938, DeJong was 32, and a librarian encouraged him to try writing.  He soon published his first book, The Big Goose and the Little White Duck.   World War II interrupted DeJong's budding writing career, and he served in China with the US Army Air Corps (the forerunner of the Air Force).  Afterwards he returned to writing and--after some time and some day jobs--became very successful.   He apparently had a great dislike for publicity or attention, and rarely made appearances as an author.

DeJong wrote a whole lot of books and won awards for many of them, including a Newbery and an HCA Award--the first given to an American writer.   I'm not sure we hear much about him now, though he was one of the most popular American children's writer's of the mid-20th century.  If you look in the children's room of your library, you might find a whole shelf of old DeJong stories.  Several were illustrated by Maurice Sendak as well.

Many of DeJong's books focus on animals--not just sentimental animal stories, but realistic ones, often with ecological concerns as well.  Hurry Home, Candy and Along Came a Dog both feature lost dogs looking for homes, but they aren't sentimental stories. The Wheel on the School, which won the Newbery in 1955, has a whole group of schoolchildren working hard to attract a stork to their school.  And Shadrach is about a pet rabbit that disappears. 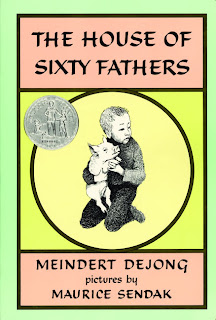 The House of Sixty Fathers reflects some of DeJong's experiences during the war.  It's the story of a young Chinese boy who ends up living at an American airbase after the Japanese invasion separates him from his family.  (DeJong did in fact take in an orphaned boy while he was serving in China, and planned to adopt him, but the new Communist regime made it impossible.)  This story's theme was considered too difficult for children when it was first written, so it was some time before it was published, but it got a Newbery Honor in 1957.


I hope you'll give these stories a try if you can.  They may be old, and a bit slow-moving by our rather hyper standards, but DeJong was absolutely modern in his themes and concerns, which are just as relevant now as they were then.  Besides, the writing is lovely.

For some reason, I always thought Meindert DeJong was a woman! Whoops! I think perhaps I read part of The Wheel on the School when I was in elementary school--it sounds really familiar.