The Master and Margarita 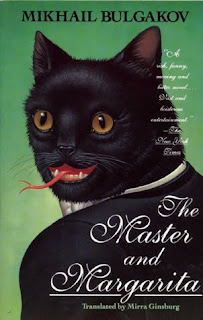 The Master and Margarita, by Mikhail Bulgakov

Bulgakov told a modern Faust story set in Soviet Moscow, in which he satirized the Soviet government, compliant writers, and everyone else too. He started the novel in 1928, burned the manuscript in fear of arrest, and continued working on successive drafts until his death in 1940. Bulgakov was nearly always repressed by the Soviet system, and The Master and Margarita remained unpublished until 1966, when a heavily censored edition came out. A fuller manuscript was circulated through the samizdat system until more complete editions were published in 1967 and 1973. But the current version was finally compiled even later, in 1989. (Are you tired yet?)

The novel starts with the devil's arrival in Moscow for a visit. It is 1920 and the Soviets are newly in power, enforcing atheism and correct opinions. Professor Woland (as he is called) and his retinue of demons proceed to wreak havoc in the city, especially upon the writers belonging to MASSOLIT, a club for government-approved literary endeavors. Others suffer too--the newly wealthy elite, theater people, in fact anyone who comes into contact with the devil. The local insane asylum fills up, but one inmate has been there for some time; he is only known as the master. His lover, Margarita, and his novel about Pontius Pilate are all he cares for. Margarita happily makes a deal with the devil to save her master, and I'll stop there.

It's an amazing and surreal book. I can't even start to do it justice, so just read it. 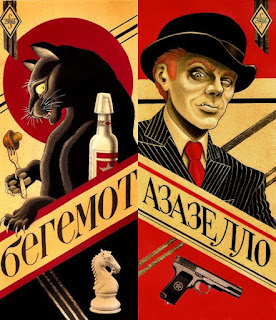 I found plenty of interesting artwork around the Internet!

This book is for the re-read selection for the Back to the Classics Challenge. I've been meaning to re-read it for years anyway!
classics Russian literature

Faith said…
I read this book way back in college when I took a Russian history course. I've been meaning to reread it too. I remember finding it fascinating in a nightmarish sort of way!
March 18, 2012 at 5:20 AM

Unknown said…
I also like this book very much…
Although it is generally based on Faust (as you mentioned), it has citations to Tolstoy’s Anna Karenina, Pushkin’s poems and Dostoyevsky’s The Brothers Karamazov too.
I liked the pictures you used in the post… by the way, if you go to Bulgakov’s museum in Moscow (where he lived: flat no.50 !), all the walls and even the stairs are painted with portraits of the book’s characters :)
March 18, 2012 at 10:12 AM

Jean said…
Thanks Iskra! I like that Bulgakov lived in no. 50 too. He used a lot of his life. So if I read Eugene Onegin next--as is my plan--will I see things from M&M? It's far too long since I read The Brothers Karamazov for me to have noticed anything, and AK is still on my list. Clearly I need to spend more time with Russians. :)
March 18, 2012 at 1:21 PM

Sarah Reads Too Much said…
I totally need to read this. After reading Tolstoy earlier this year, I think I am becoming fascinated by Russian Lit.
March 31, 2012 at 7:53 AM