Week 44: The Color of Water 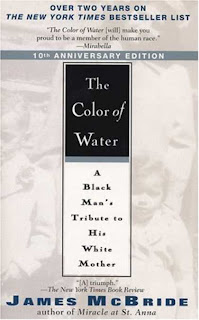 The Color of Water, by James McBride

James McBride's book honoring his mother tells her unusual story. The chapters alternate between her own words explaining her life, and McBride's chapters telling about their family life as he grew up.

McBride's mother never talked about her past and he spent years trying to get her to talk about it. She was white and Jewish, and married a black man in 1942. She became a Christian and together they started a church in the New York housing project where they lived. She had eight children before her husband suddenly died, and after a while she remarried and had four more before she was widowed for a second time. Her entire adult life was spent as the only white woman living in an entirely black area, trying to raise 12 children in poverty, and living out her determination to get all of them to college. She always said that money wasn't important; only education was important.

It's a wonderful book and an amazing story.
Posted by Jean at 1:00 PM